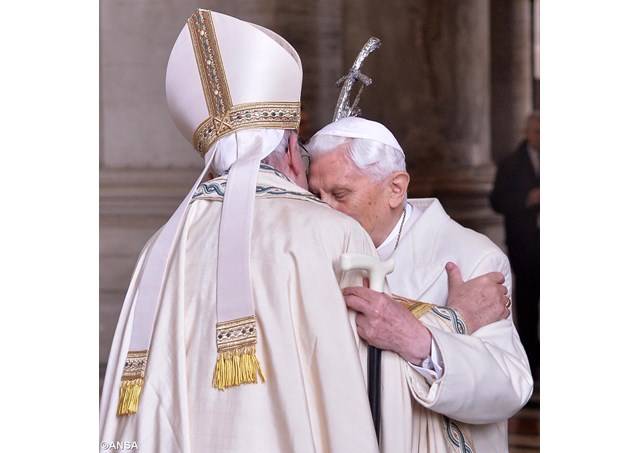 (Vatican Radio) Pope-emeritus Benedict XVI has given a very rare public interview to the newspaper of the Italian Bishops’ Conference, Avvenire.

Conducted by renowned theologian, Fr. Jacques Servais SJ, the interview focuses on two highly controversial issues in the post-Conciliar era: the right understanding of Christ’s unique and universal act of salvation with respect to those who do not profess Christian faith; and the right understanding of the primacy of mission in the life of the Church with respect to dialogue.

At the core of the two distinct, though related questions, says Pope Benedict, is the need to recover a sense of the Divine mercy - something Pope Francis has understood and placed at the center of his pastoral solicitude.

“Only where there is mercy does cruelty end,” said the Pope-emeritus in the interview.

“Pope Francis is totally in accord with this line: his pastoral practice expresses itself precisely through the fact that he continually speaks to us of God's mercy. It is mercy that moves us towards God, while justice frightens us before him.”

“In my view,” continued Pope Benedict, “this sets in relief the fact that, beneath the veneer of confidence in himself and [human] justice, contemporary man hides a deep knowledge of his injuries and his unworthiness before God: he is waiting for mercy,” said Pope Benedict.