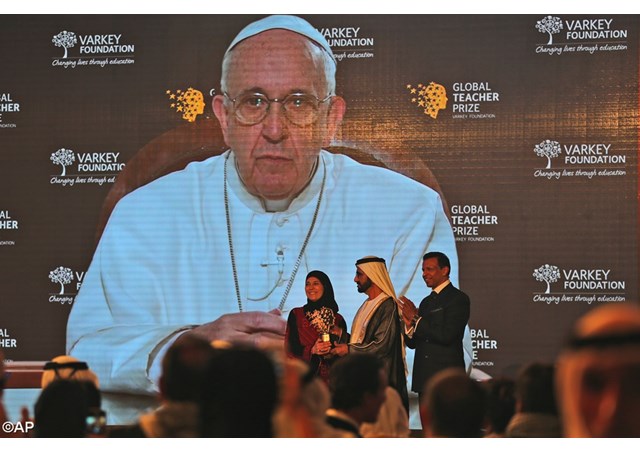 (Vatican Radio) Pope Francis on Sunday evening announced through a video-message the winner of the Global Teacher Prize, a $1 million award presented by the Varkey Foundation.

The Pope’s announcement had been previously recorded in the Vatican, and was played at the awards ceremony in Dubai.

"I would like to congratulate the teacher Hanan Al Hroub for winning this prestigious prize due to the importance she gives to the role of play in a child’s education,” Pope Francis said.

The winner of the prize is a primary school teacher in the West Bank city of al-Bireh just outside Ramallah. She grew up in a refugee camp, and now teaches refugees.

“A child has the right to play,” – Pope Francis said –  “Part of education is to teach children how to play, because you learn how to be social though games, and you learn the joy of life.”

Al-Hroub later told the Associated Press it was “amazing” to hear the Pope say her name, and said she would use the million-dollar prize money to create scholarships for students who excel in order to encourage them to choose careers in teaching.

During her acceptance speech, Al-Hroub reiterated her commitment to non-violence and dialogue, a theme also touched on in Pope Francis’ video-message.

“A population that is not well educated because of wars, or by other reasons that exist in order not to get any education, is a population that decays,” said Pope Francis. “That is why I would like to highlight the noble profession of a teacher.”