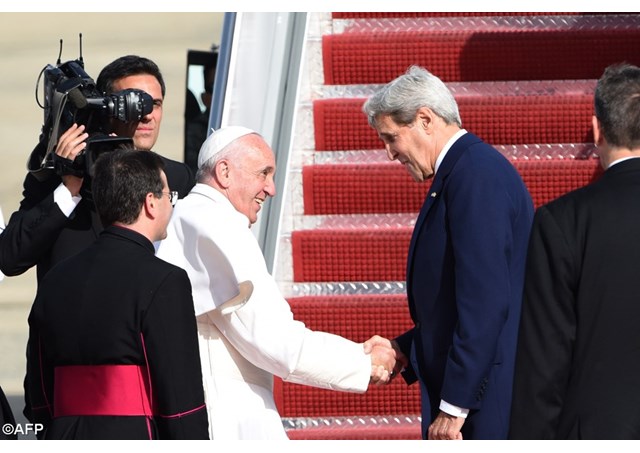 (Vatican Radio) US Secretary of State John Kerry has extended official congratulations to Pope Francis on the occasion of the third anniversary of the Holy Father's election to the See of Peter. In a press statement released through the Dept. of State, Sec. Kerry thanks Pope Francis for his role in renewing his country's diplomatic relations with Cuba, and praises the Holy Father's efforts to facilitate dialogue between the Colombian government and FARC rebels. Kerry also praises the Pope's moral leadership on a host of issues including responsible care for creation, our duty to care for refugees, and the need to protect religious freedom. Kerry says, "On this special day, I join men and women across the globe in congratulating the Holy Father and in wishing him continued success in leading the Catholic Church and appealing to the better angels within us all."

Please find the full statement, below

On behalf of President Obama, the Department of State, and the people of the United States, Teresa and I offer our warmest congratulations to His Holiness Pope Francis on the third anniversary of his election as Bishop of Rome and leader of the Roman Catholic Church.

Last fall, I was honored to join in welcoming the Holy Father on his first papal visit to our country, and, like millions of other Americans, I was inspired and moved by his powerful words at events in New York, Philadelphia, and Washington D.C., including his memorable address to the United States Congress.

The United States is grateful for His Holiness’ role in renewing our diplomatic ties with Cuba. The Holy Father was instrumental in encouraging talks between our two countries, and the United States will continue to seek his support as we proceed with our renewed bilateral relationship with Cuba. We also greatly appreciate the Holy Father’s support for Colombia and the FARC to successfully negotiate a peace agreement.

I believe that Americans -- Catholics and non-Catholics alike -- share His Holiness’ conviction that we must do all we can to protect the environmental health of our planet, to uphold the common good, to promote religious freedom, to care for refugees and others who are disadvantaged, and to strive for justice and peace. Many around the world are inspired by his dedication to helping the marginalized and disadvantaged. We share His Holiness’ conviction that all people have dignity and worth and that we must strive to help everyone reach his or her full potential.

On this special day, I join men and women across the globe in congratulating the Holy Father and in wishing him continued success in leading the Catholic Church and appealing to the better angels within us all.