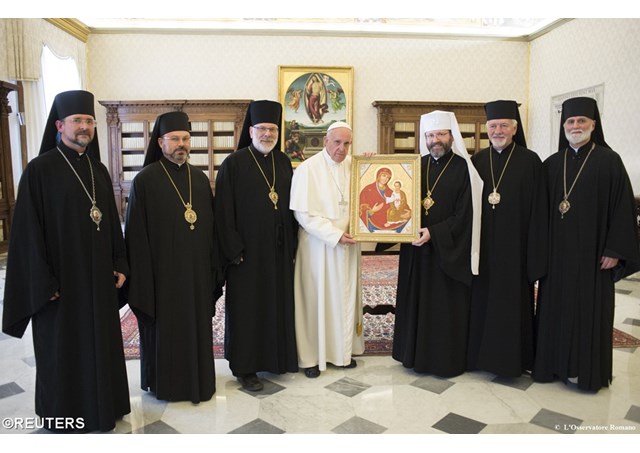 As Pastors We Speak Out on Behalf of Our People

“We came to reaffirm our communion with the Holy Father and to ask for his help for the suffering people of Ukraine during the Jubilee Year of Mercy,” stated His Beatitude Sviatoslav Shevhchuk. “And the Holy Father heard us.”

In Rome on the eve of the 70th anniversary of the Lviv pseudo-synod the Head of the Ukrainian Greek Catholic Church (UGCC), His Beatitude Major Archbishop Sviatoslav, and the members of the Permanent Synod came to Rome to meet His Holiness Pope Francis. “We reaffirm what no totalitarian regime could break: our communion with Rome and the Universal Church,” His Beatitude said.

The Head of the UGCC and the Permanent Synod conducted meetings, discussions with representatives of the Holy See, and prepared a public statement denouncing the invasion and hybrid war in Ukraine and decrying the suffering of millions of innocent men, women and children. The Church condemns the atrocities, the kidnappings, imprisonment and torture of citizens of Ukraine in the Donbas and Crimea—especially abuses directed at religious communities and ethnic groups, especially Muslim Tatars, as well as broad violations of civic rights and the human dignity of millions.

The Ukrainian Greek Catholic Church ceaselessly prays for and promotes peace, and today its leadership appealed to the Holy Father and to the world to help stop the war and stem the humanitarian crisis caused by the Russian invasion of Ukraine.  The ongoing undeclared hybrid war—today marginalized in the world’s attention—has directly affected 5 million people. It has caused 10,000 deaths, tens of thousands of crippling injuries, and rendered homeless over two million people. Insidious means of hybrid warfare have brought post-traumatic shock upon hundreds of thousands and caused immense socio-economic damage. Much of the country’s industrial infrastructure has been obliterated and its currency has lost two-thirds of its value impoverishing the entire population of 45 million. Ukrainians’ identity is relentlessly denigrated by a sophisticated and well-funded international propaganda campaign. “The people are suffering, Holy Father, and they await your embrace,” His Beatitude said. “Pope Francis made it clear that he would act.”

The twentieth century was a time of untold suffering for Ukraine. Two World Wars, genocides, a state-planned famine, and ethnic cleansing caused some 15 million deaths. The UGCC, a Church which historically stood in solidarity with its people and their suffering was brutally suppressed by Stalin. The Soviets sought to separate it from the Catholic communion, especially from the Bishop of Rome. Stalin’s regime outlawed the UGCC, making it the world’s largest banned Church, through a violent and manipulative non-canonical action called by historians the “Pseudo-synod of Lviv” held 8-10 March 1946. The Soviet authorities imprisoned all of the bishops, hundreds of clergy and tens of thousands of faithful and transferred all Ukrainian Greek Catholic property to the Orthodox Church of the Moscow Patriarchate or confiscated it for secular purposes.

But the Church has revived miraculously and is a thriving, dynamic body active throughout Ukraine and on four continents, with young clergy and a dedicated laity inspired by the example of their twentieth century martyrs.

“For Ukrainians who belong to different Churches and religious organizations and even secular citizens, the Holy Father is a global moral authority who speaks the truth. This voice of truth is particularly important for the suffering people of Ukraine. If the people do not hear or understand this voice they become confused, anxious, and feel forgotten,” His Beatitude said to Pope Francis. “The Holy Father emphasized that one cannot solve ecumenical problems at the expense of an entire Eastern Catholic Church.”

“The UGCC stands ready to provide responsible, transparent, ecumenically sound administration of international aid, serving the Ukrainian population without regard to ethnicity, political or linguistic preferences or religious affiliation. We are ready to cooperate in a well-coordinated plan that includes governmental and non-governmental bodies. Enough of this suffering. It can be prevented. It can be healed.  Let us make the 'Year of Mercy' a reality for the people of Ukraine,” said His Beatitude.