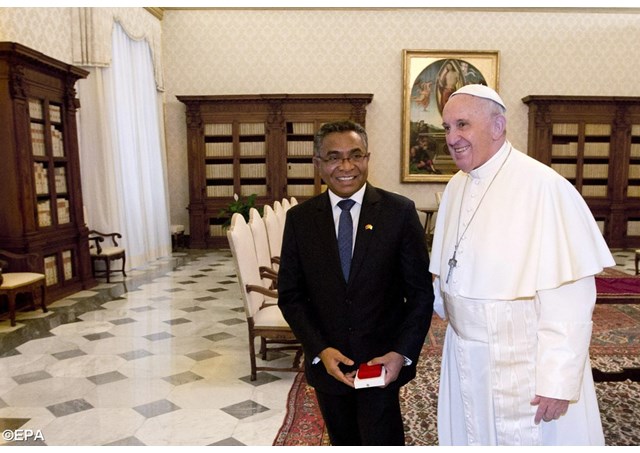 (Vatican Radio) Pope Francis on Thursday received Prime Minister of the Democratic Republic of Timor-Leste (East Timor), His Excellency Rui Maria de  Araújo, who subsequently met with the Vatican Secretary of State, Cardinal Pietro Parolin,  who was accompanied by the under-secretary for Relations with States, Msgr. Antoine Camilleri.

A press statement from the Holy See Press Office called the discussions cordial, and said “the good relations between the Holy See and Timor-Leste  were evoked, as well as the historical contribution of the Church to building up the nation and collaboration with the civil Authorities in various social areas, such as education, health and the fight against poverty.”

At the end of the meeting with the Secretary of State, in the Hall of Treaties in the Vatican  Apostolic Palace, there took place the exchange of instruments for the ratification of the Accord  between the Holy See and the Democratic Republic of Timor-Leste, signed in Dili on 14 August  2015.

The exchange signifies ratification of the agreement which contains 26 articles that recognizes the Church as having juridical rights.

Secretary of State Cardinal Pietro Parolin addressed those gathered. He noted that the agreement is the result of many years of negotiations backed by a common spirit of dialogue and cooperation, recognizing the important role the Catholic Church plays in the life of the Timorese people. Commitments have been made in the area of education, health and the fight against poverty.

The legal framework, the Cardinal noted, does not mean special privileges for the Church but simply allows the Church to contribute freely to building a more harmonious society, animated by justice and peace.

The Cardinal concluded by entrusting the people of the Democratic Republic of Timor-Leste to the maternal protection of the Mary, Mother of God.