Pope: 'Church does not need "blood money" but openness to God's mercy' 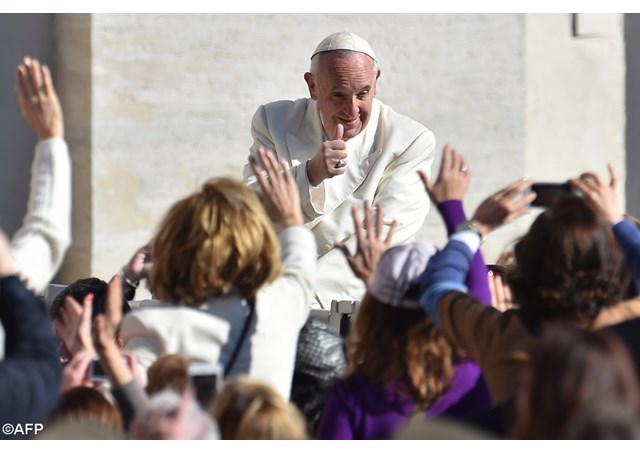 (Vatican Radio) Pope Francis says the Church has no need for “blood” money that derives from exploitation of people; what it needs is that the hearts of faithful be open to God’s mercy.

Speaking to the crowds gathered in St. Peter’s Square for the weekly General Audience, the Pope’s catechesis was inspired by the Holy Year of Mercy and he reflected on God’s fatherly love and forgiveness.

When God’s children err in their ways, the Pope said, God calls out to them lovingly and never disowns them.

The Lord never disowns us; he always calls us to be close to Him. This – the Pope said – is the love of our Father, the mercy of God.

“To have a Father like this gives us hope and trust” he said.

And commenting on the fact that “when a person is sick he turns to the doctor; when he feels he has sinned” Francis said: “he must turn to God – because if he turns to the witchdoctor he will not be healed”.

Pointing out that “we often choose to tread the wrong paths in search of a justification, justice, and peace” Pope Francis said that these are gifts that are bestowed upon us by the Lord if we choose the right path and turn to Him.

“I think of some benefactors of the Church, who come with an offer for the Church and their offer is the fruit of the blood of people who have been exploited, enslaved with work which was under-payed” he said.

“I will tell these people to please take back their cheques. The People of God don’t need their dirty money but hearts that are open to the mercy of God” he said.

Reflecting on how the prophet Isaiah presents God in the Scriptures, he said that this fatherly love of the Lord also involves correction, a summons to conversion and the renewal of the Covenant.

If he chastises his people, the Pope said, it is to move them to repentance and conversion, and in his mercy, he asks them to turn back to him with all their hearts and to receive a righteousness that is itself his gift.

“Though our sins be like scarlet, he will make them white as snow” he said.

And with a special thought and mention for the many refugees who are attempting to enter Europe and do not know where to go, Pope Francis invited the faithful to be open, during this year of grace, to our heavenly Father’s merciful invitation to come back to him and to experience this miracle of his love and forgiveness.