Pope: we are not saved by political or clerical parties 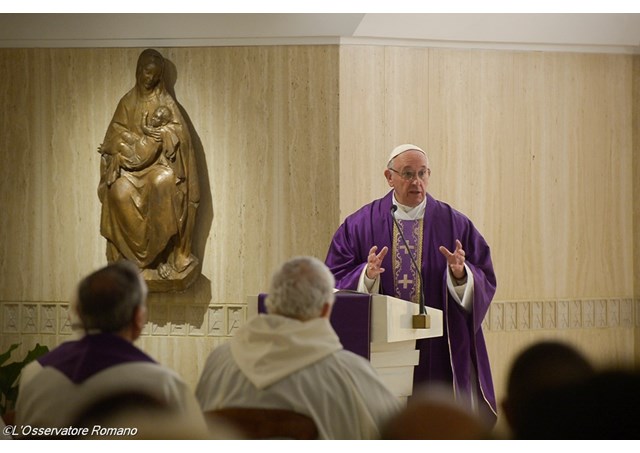 (Vatican Radio) God’s salvation does not come from great things, from power or wealth, nor from clerical or political parties, but from the small and simple things of God. That was Pope Francis’ message on Monday during the daily Mass at the Casa Santa Marta.

Salvation comes from the simplicity of the things of God, not from the powerful

The day’s readings spoke about contempt. In the first Reading, Naaman the Syrian, a leper, asked the prophet Elisha to heal him, but could not appreciate the simple means by which this healing would be accomplished. The Gospel spoke of the disdain the inhabitants of Nazareth felt at the words of Jesus, their fellow countryman. It was not “how we thought salvation should be, that salvation we all want.”

Jesus felt the “contempt of the doctors of the Law who sought salvation in moral casuistry,” and in a multitude of precepts. The people, though, did not have faith in them, “or in the Sadducees who sought salvation in compromises with the powers of the world, with the [Roman] Empire. Thus they sought after salvation: the one group, from clerical parties; the other from political parties. But the people did not have confidence in them, they didn’t believe them. Yes, they believed Jesus, He spoke ‘with authority.’ But why this contempt? Because in our imagination, salvation should come from something great, something majestic; only the powerful, those who have strength or money or power, can save us. These people can save us. And the plan of God is different! They felt contempt because they could not understand that salvation only comes from the small things, the simplicity of the things of God.”

The two pillars of the Gospel that people look down on

“When Jesus proposed the way of salvation,” the Pope continued, “He never spoke of great things,” but about “little things.” These are “the two pillars of the Gospel,” that we read about in Matthew: the Beatitudes, and in chapter 25, the final Judgment, where Jesus says, “Come, come with me because you have done these things, simple things.”

“You did not seek salvation or your hope in power, in political parties, in negotiations. No! You have simply done these things. And so many people look down on this! As a preparation for Easter, I invite you – I’ll do it too – to read the Beatitudes and to read Matthew 25, and to think and to see if there is something I look down on, if something disturbs my peace. Because contempt is a luxury that only the vain and the proud allow themselves. We should see if, at the end of the Beatitudes, Jesus says something” that makes us ask why He said that. “‘Blessed is he who is not scandalized in me,’ who does not look down on these things, who does not feel contempt.”

The folly of the Cross

“It would do us good to take some time – today, tomorrow – to read the Beatitudes, to read Matthew 25, and to pay attention to what happens in our heart: if there is some feeling of contempt. And seek grace from the Lord to understand the only path of salvation is ‘the folly of the Cross,’ that is, the Son of God ‘emptying Himself,’ making Himself small, represented here [in the Readings] in the cleansing in the Jordan, or in the small village of Nazareth.”