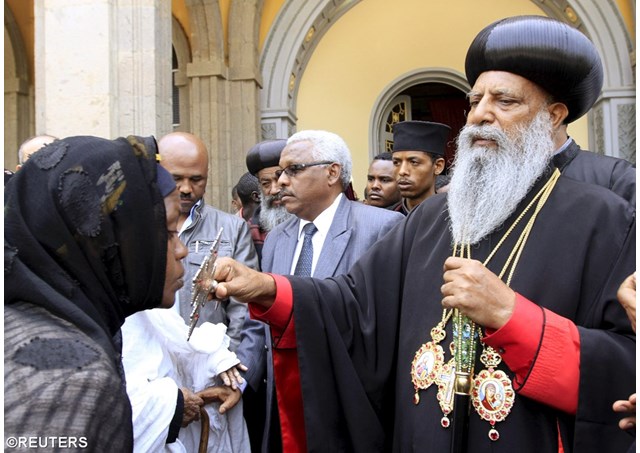 (Vatican Radio) The head of the Ethiopian Orthodox Tewahedo Church, Abuna Mathias I will be in Rome this weekend for a meeting with Pope Francis on February 29th. The Patriarch will also visit the tomb of St Peter, hold talks at the Pontifical Council for Promoting Christian Unity and celebrate the Divine Liturgy with members of the large Ethiopian community here in the chapel of Rome’s ‘Urbanianum’ College.

This Oriental Orthodox Church traces its roots back to the 4th century saint Frumentius who was ordained bishop in Egypt by St Athenasius of Alexandria and returned to Ethiopia to spread the Christian faith. The Church has maintained a number of ancient Jewish traditions, including the practice of circumcision, dietary restrictions and the observance of the Sabbath day.

The Church counts some 35 million members and until very recently maintained the use of the ancient Ge’ez language for the liturgy, although many parishes now prefer to use Amharic, the main language of modern day Ethiopia.

The Orthodox Church is part of the International Mixed Commission for Theological Dialogue with the Catholic Church which meets annually, alternating between Rome and one of the countries represented by the seven Orthodox members. Relations with the Catholic Church were significantly strengthened under the previous Patriarch, Abuna Paulos, who met with Pope John Paul II ion 1993, with Pope Benedict in 2009 and in that same year, also addressed the special Synod of Bishops for Africa as an ecumenical guest. In January 2012 the members of the Mixed Commission were warmly welcomed to Addis Abeba by Abuna Paulos, who died suddenly later in the year.

Abuna Mathias, who lived in exile for three decades during the communist dictatorship of Mengistu Haile Mariam, was elected as head of the Church three years ago, on February 28th, 2013.