Cardinal Parolin: Civil Unions should not be equated with marriage 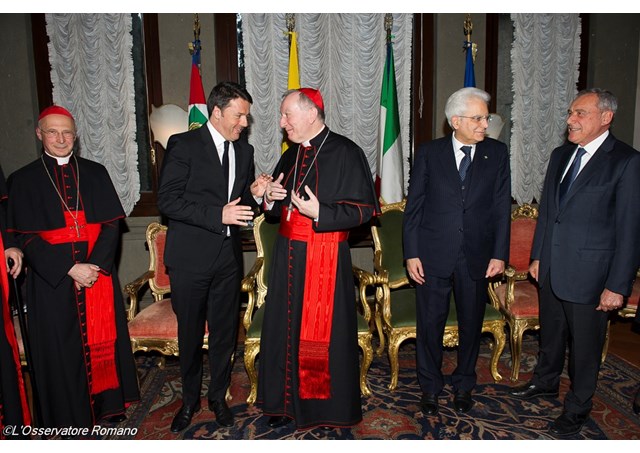 (Vatican Radio) The Vatican Secretary of State, Cardinal Pietro Parolin, said on Tuesday it was “essential” that Italian legislation not equate civil unions with marriage.

The so-called Cirinnà bill would give legal recognition to same-sex civil unions, as well as granting the members of such unions limited rights to adopt children. Debate on the proposed legislation is taking place in Italy’s Senate this week.

The Vatican diplomat was speaking after the annual reception with Italian government officials to mark the anniversary of the Lateran Pacts, the 1929 treaty between Italy and the Holy See which settled the longstanding disputes arising over the nineteenth century Italian takeover of the Papal States, and also established the Vatican City State.

The meeting took place at the Italian Embassy to the Holy See, and both the Italian President Sergio Mattarella and the Italian Prime Minister Matteo Renzi attended the event.

“The [Cirinnà] bill came up, but did not enter into our discussions. I think everyone’s position is clear, although it is not clear what will be happening in the coming days,” the Cardinal said.

“However, at the same time we must other backdoors, quite apart from the direct reference to stepchild adoption, which could be derived from equating civil unions with marriage,” continued Cardinal Parolin.

He added it was “essential” to respect the ruling of the Constitutional Court that any legislation not equate civil unions to marriage.

Cardinal Parolin called the meeting “good” and said the parties spoke about other bilateral issues, including the recently concluded agreement on fiscal matters, collaboration during the Jubilee year, and the “great themes” of education and the family.

“It was positive…there is a desire for collaboration, and a willingness to overcome any difficulties which might arise,” he said.