Pope Francis: God is real, too many Christians are fake 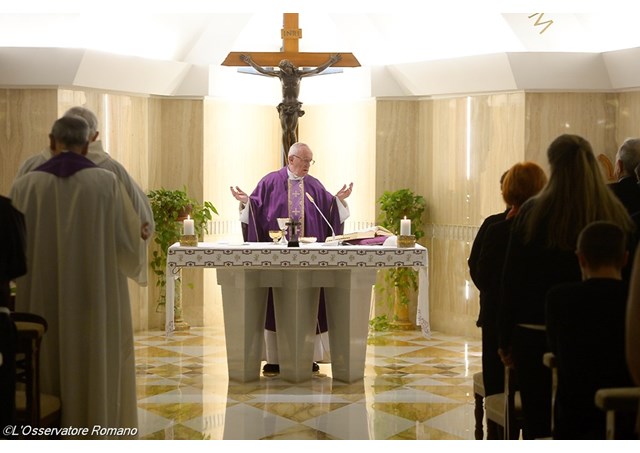 (Vatican Radio) Pope Francis on Tuesday morning described Christianity as a religion that by its very nature must act for good, not a “religion of saying” made of hypocrisy and vanity. The Holy Father was speaking at Mass in the Chapel of the Casa Santa Marta in the Vatican.

Following the readings of the day, Pope Francis reflected on God’s reality and the “fakeness” of so many Christians who treat the faith as though it were window dressing – devoid of obligation – or an occasion for aggrandizement rather than an opportunity for service, especially to our neediest neighbors.

The way of doing

Building on the reading from the book of the prophet Isaiah in concert with the passage proclaimed from the Gospel according to St. Matthew, the Holy Father sought to explain once again the “evangelical dialectic between saying and doing.” He placed emphasis on the words of Jesus, which  unmask the hypocrisy of the Scribes and Pharisees, calling the disciples and crowds to do as they say, though not as they do:

“The Lord teaches us the way of doing: and how many times we find people – ourselves included – so often in the Church, who say, ‘Oh, we are very Catholic.’ ‘But what do you do?’ How many parents say they are Catholics, but never have time to talk to their children, to play with their children, to listen to their children. Perhaps they have their parents in a nursing home, but always are busy and cannot go and visit them and so leave them there, abandoned. ‘But I am very Catholic: I belong to that association,’ [they say]. This is the religion of saying: I say it is so, but I do according to the ways of the world.”

The way of “saying and not doing,” says the Pope, “is a deception.” Isaiah's words indicate what is pleasing to God: “Cease to do evil, learn to do good,” and, “relieve the oppressed, do right by the orphan, plead for the widow.” It also shows another thing: the infinite mercy of God, which says to humanity, “Come, let us talk it over: though your sins be as scarlet, they shall be as white as snow.”:

“The mercy of the Lord goes out to meet those who dare to argue with Him, but to argue about the truth, about the things one does or does not do, [and He argues] in order to correct me. This, then, is the great love of the Lord, in this dialectic between saying and doing. To be a Christian means to do: to do the will of God – and on the last day – because all of us we will have one – that day what shall the Lord ask us? Will He say: “What you have said about me?” No. He shall ask us about the things we did.”

Pope Francis went on to make explicit mention of the lines from Matthew’s Gospel, which foretell of the Last Judgment, when God will call men to account for what they have done to the hungry, thirsty, imprisoned, strangers. “This,” said the Holy Father, “is the Christian life: mere talk leads to vanity, to that empty pretense of being Christian – but no, that way one is not a Christian at all.”:

“May the Lord give us this wisdom to understand well where lies the difference between saying and doing, and teach us the way of doing and help us to go down that way, because the way of saying brings us to the place where were these teachers of the law, these clerics, who liked dressing up and acting just like if they were so many Majesties – and this is not the reality of the Gospel. May the Lord teach us this way.”