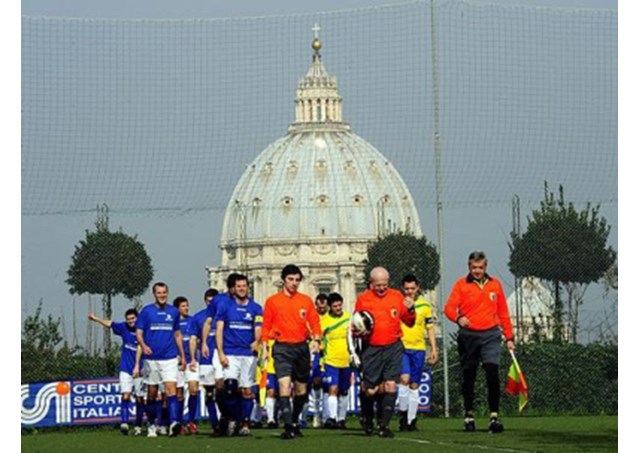 (Vatican Radio) The Clericus Cup, an annual football tournament played by teams representing Catholic seminaries in Rome kicks off Saturday in the Vatican with squads vying to be this year’s champions.

The tournament, which is in its 10th year, is organised by the Centro Sportivo Italiano and brings together seminarians and ordained priests from all over the world.

The theme for this edition, entitled, “Mercy, out on the field” pays homage to the Jubilee of Mercy and all the players will have these words printed on their respective jerseys.

Ahead of the competition the 16 captains from the participating teams made it literally their first goal to pass through the Holy Door of St Peter’s Basilica.

One of the players in the tournament is North American College seminarian Martin Amaro. His squad the North American Martyrs will be playing in one of the opening matches on Saturday on a pitch at the Pontificio Oratorio di San Pietro, just a stone’s throw from the Vatican.

Listen to the interview

“I’m really a fan of big European soccer teams, so I’m just a soccer fan in general and I love playing the sport”, he said.

For Martin the fact that this edition is being played in the Year of Mercy has added significance and he is hoping that the tournament will also shine the spotlight further on the Extraordinary Jubilee.

So what does he think about Pope Francis being a fan of the “beautiful game”. “He’s been inviting football players to the Vatican… so yea, very exciting, it brings a spirit to everybody.”

The Clericus Cup was started in 2007 but had its beginnings in 2003 when Jim Mulligan a seminarian at the  Pontifical Beda College, organised a knockout tournament involving eight international teams from the Rome Seminary Colleges. It has come a long way since then and now has its own dedicated website and is also prominent on social media.

The Cup final will be played on Saturday the 28th May.