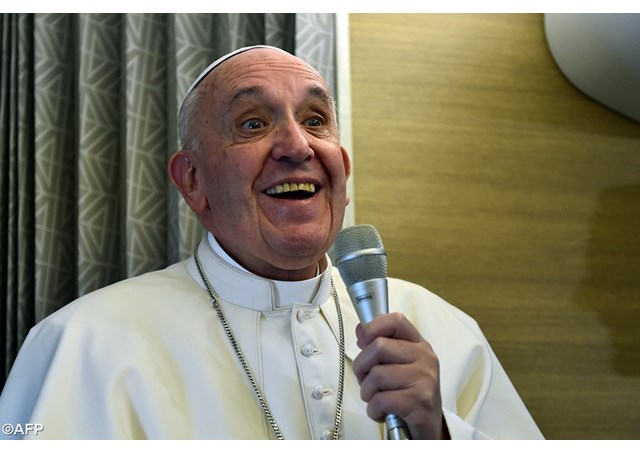 (Vatican Radio) Pope Francis gave a lengthy press conference on the flight back from Mexico to Rome on Thursday, sharing thoughts on many subjects including pedophile priests, Mexico’s 'desaparecidos', the Church in Ukraine and the Zika virus.

Asked why he had not met with relatives of the 43 Mexican student teachers who went missing in Guerrero state in 2014, Pope Francis said he had spoken at length about the problems of assassinations by criminal gangs and drug traffickers. He said he was willing to meet with the relatives but there are many groups representing the 'desaparecidos' and there are also internal disputes among these groups.

Another Mexican journalist asked about the problem of child abuse and the legacy which Marcial Maciel, founder of the Legionaries, left in the country. Pope Francis said that a bishop who knowingly moves a priest accused of abuse from one parish to another is ‘irresponsible’ and should resign from his post. He also stressed how hard his predecessor Pope Benedict had worked over the past decade to tackle the problem and pointed to the various steps he has taken with his Council of Cardinals, the Congregation for the Doctrine of the Faith and the Pontifical Commission for the Protection of Minors.

Asked about immigration and the threats of U.S. presidential candidates to build walls along the southern border, the Pope said he would not comment on the U.S. elections but added “a person who thinks only of building walls anywhere – rather than building bridges – is not a Christian”.

Pope Francis also spoke at length about his historic meeting last Friday with Russian Orthodox Patriarch Kirill and about the concerns of Greek Catholics in Ukraine who feel betrayed by the encounter. He said he understood these fears, expressed by Greek Catholic Archbishop Sviatoslav Schevchuk, adding that he is entitled to his own ideas regarding the conflict in Ukraine. It’s important to take the comments in context, the Pope insists, since Archbishop Schevchuk also describes the encounter as “a good thing” which he hopes will lead to further dialogue.

Asked about responses to the Zika virus which is causing birth defects, especially across Latin America, the Pope stressed that abortion is a crime which can never be justified as a lesser evil and which goes against the Hippocratic oath that doctors must take. Using contraceptives to avoid pregnancy can be acceptable in difficult situations, he said, noting that Pope Paul VI authorized nuns in Africa to do the same half a century ago when they were threatened with rape.

The Pope also talked about the European Union, saying that he will soon be receiving the prestigious Charlemagne prize which he will offer for the future of the continent. Endorsing the concept of a ‘re-founding’ of the European Union, he asked who could be the founding fathers of today?

One American journalist returned to the question of marriage, asking how a merciful Church can forgive the sins of a murderer more easily than someone who divorces and remarries? Pope Francis said the post-Synod document on the family – which should be published before Easter – will explore in depth the question of marital breakdown and especially the need for better marriage preparation. He noted how many couples are pressured into getting marriage quickly if there is a baby on the way, saying that as bishop of Buenos Aires he instructed his priests to put off such weddings until the couples were ready to commit to each other for the rest of their lives. Divorced and remarried couples must be reintegrated into the life of the Church, the Pope stressed, adding that it is a long journey but that “all the doors are open”.

Commenting on revelations this week that Pope John Paul II had a long standing close friendship with an American woman, Pope Francis replied that a man who is unable to have such good friendships with women is “a man who is missing something” in his life. Personally speaking, he said, he likes to ask advice from women who “see things in a different way”. The Church and its priests have still not really understood how much good women can bring in terms of advice, help and healthy friendships, he added.

Speaking of future trips and meetings, Pope Francis said he’d like to travel to China and that he was hoping to meet soon with the Grand Imam of al-Azhar, Ahmed el-Tayeb. Finally  the Pope joined journalists in thanking Alberto Gasbarri, the organizer of papal trips for the past four decades, who is retiring at the end of the month.