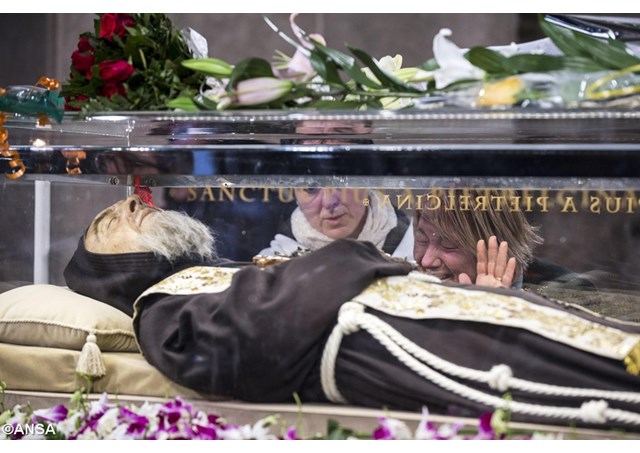 (Vatican Radio) The relics of St. Pius of Pietralcina – Padre Pio, as he is popularly known around the world – and St. Leopold Mandic, made their way on Friday afternoon from the Church of San Salvatore in Lauro to St. Peter’s Basilica in the Vatican.

The relics of the two great saints – both of whom were Capuchin Franciscan friars and priests who were renowned as confessors – have come to Rome by the desire of Pope Francis in connection with the Jubilee Year of Mercy, as part of efforts to renew, rekindle and strengthen interest in and love for the Sacrament of Penance or Reconciliation.

Following a Mass in nearby San Salvatore, at which the principal celebrant was the Archbishop of Manfredonia – Vieste – San Giovanni Rotondo, Michele Castoro, the saints' relics were carried in solemn procession through the streets of Rome, across the Tiber River and into St. Peter’s, where they were received by the Cardinal-Archpriest, Angelo Comastri, who, after a moment of prayer, accompanied them into the Basilica and saw them placed in the central nave before the Altar of the Confession for the faithful to venerate.

The relics will remain in St. Peter’s for veneration until the morning of February 11 when, after a Holy Mass of thanksgiving at 7:30 am at the Altar of the Chair, they will be returned to their places of repose.