Relics of Saint Pio and St Leopold arrive in Rome 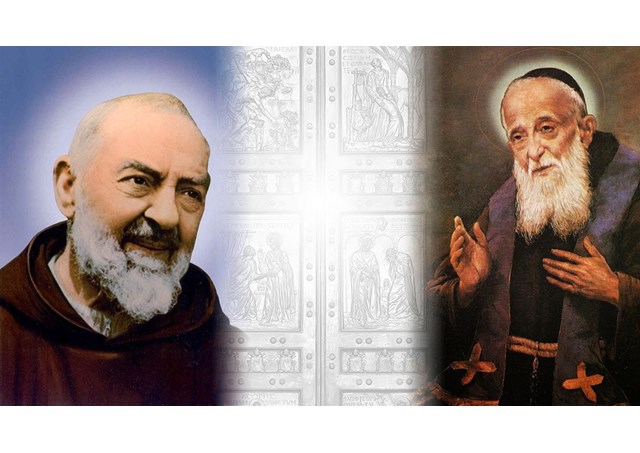 (Vatican Radio) On Wednesday two great saints, renowned for their holiness and for their dedication to the Sacrament of Confession, came to Rome as part of celebrations for the Jubilee of Mercy.

Listen to the report from the Basilica of San Lorenzo Outside-the-Walls by Christopher Wells:

Huge crowds greeted the arrival of the relics of Saint Pius of Pietrelcina – better known as Padre Pio – and Saint Leopold Mandic at the Basilica of San Lorenzo Outside-the-Walls in Rome. Later they will be taken to the Church of San Salvatore in Lauro, before being taken in procession to St Peter's Basilica on Friday.

At a press conference last week, Archbishop Rino Fisichella, president of the Pontifical Council for Promoting New Evangelisation, said, “Such an occasion is of great significance for it is an unprecedented event, given the stories of these two saints who spent their lives in the service of the mercy of God.”

Saint Pio and Saint Leopold were well known as confessors and spiritual guides. The two Franciscans, both of whom lived well into the twentieth century, were famous for spending many hours each day hearing confessions of people from all over the world. Pope Francis himself requested that the relics of the saints come to Rome, in part to inspire the ministry of the priests who have been chosen as Missionaries of Mercy for the Jubilee. The Missionaries of Mercy, said Archbishop Fisichella, “are a select number of priests who have received from the Pope the charge to be privileged witnesses in their respective Churches of the extraordinariness of this Jubilee event.”  On Ash Wednesday, more than 1,000 Missionaries of Mercy will concelebrate Mass with Pope Francis, who will give them their mandate for the Jubilee Year, including faculties to absolve even those sins normally reserved to the Holy See.

The urns containing the relics of the two Saints will be in Rome from 3-11 February. A full schedule with all the events can be found on the official website of the Jubilee of Mercy.