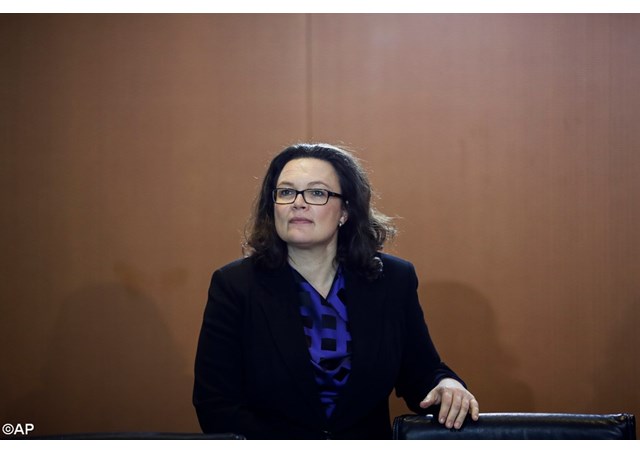 (Vatican Radio)  Germany is considering taking away benefits from asylum-seekers if they refuse to try to learn the language and integrate. The plan comes after several other European Union member states announced controversial measures to tackle the influx of refugees including seizing valuables and cutting payments, while countries such as Hungary plan to erect more fences along borders.

German Labor Minister Andrea Nahles says just as long-term unemployed are forced to take jobs if they're offered, asylum-seekers should be expected to take German language and integration classes. The minister, who wants to change the asylum law, demands that migrants fleeing war and poverty start working when they're able. But she adds they will not be asked to give up their religion, views or traditions.

Yet the minister's controversial proposals come amid growing tensions in Germany after foreigners were involved in massive sexual assaults against German women over the New Year.

And authorities are struggling to accommodate more than one million refugees who entered Germany last year alone, admits Emily Haber, the state secretary of Germany's Interior Ministry. "I believe the challenge is huge if is challenge is huge usually it will trigger fears and concerns. We have to address them," she said.

"And the first step in addressing them is reducing the numbers [of refugees and migrants]. We will not do it alone, we will do it with other European partners," the minister added.

Germany isn't the only Western nation reconsidering its approach towards refugees.

Denmark just approved a measure to let police seize valuables from migrants to help cover their housing and food costs; and an Austrian province this week is expected to more than halve payments to many refugees.

Several Eastern European countries go even further to halt the influx of refugees, though most of them move towards Western nations.

Hungarian Defense Minister István Simicskó has confirmed that the right-wing government is ready to build an anti-migration fence along Hungary's border with Romania if necessary.

The country already erected barbed wire fences along its frontiers with Serbia and Croatia.

Other nations are unveiling similar plans.

However European officials have expressed fears that these and other measures will eventually lead to the collapse of the European Union's passport-free Schengen Zone. The head of Germany's national railway already warned Tuesday that cross-border train services could be scrapped if Europe's open-borders system collapses.

EU leaders say there is little time left to save Schengen and hope to agree on a plan to tackle Europe's most serious refugee crisis since the Second World War.