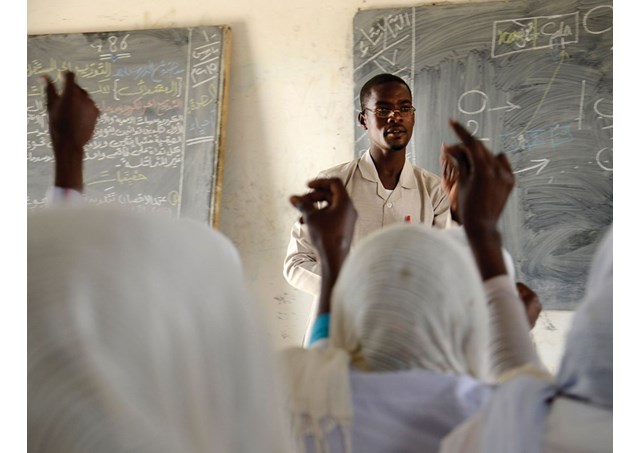 (Vatican Radio) As policy-makers, politicians and analysts debate questions such as border closures, taxation for refugees and ‘search and rescue’ missions, hundreds of thousands of refugees and forced migrants – men, women and children – struggle to find footing and dignity in whichever their place of arrival.

The Jesuit Refugee Service firmly believes that education is the key to a secure and sustainable future for refugees and their communities.

That’s why the JRS “Mercy in Motion” campaign contributes to long-term solutions for refugees, ensuring that displaced generations are equipped to rebuild their lives and communities - either in the country of asylum or upon their return home.

Pope Francis himself has expressed his support for the ‘Mercy in Motion’ campaign which also represents JRS’s concrete commitment to the Extraordinary Jubilee Year of Mercy.

Father James Martin SJ, best known perhaps for his prize-winning books and for his work as ‘editor at large’ of America Magazine, spent two years working with refugees in East Africa as part of his Jesuit training.

That life-changing experience resulted in his book “This Our Exile: A Journey with the Refugees of East Africa” and in his whole-hearted support for the “Mercy in Motion Campaign”.

“I think ‘Mercy in Motion’ which is JRS’s initiative for education - trying to get refugees in many different sorts of situations they are in educated - is very important” says Fr Martin.

He points out that often people have a hard time implementing what it means to live the Year of Mercy: “they may say I can be nice to someone in my family, or I can give some money to my parish, but here is something you can do globally”.

And pointing out that Mercy in Motion is a programme that can help us expand our mercy globally, Fr Martin says that while it is important to do things on a personal level, it is also important to have a political and economic perspective and reach out to those who have the greatest needs.

“Mercy in Motion is a great way of doing that” he says.

Fr Martin also speaks of how learning and education is actually a 2-way experience.

Recalling his own time spent  with JRS in Nairobi, Kenya, he says he learned a great deal about mercy, love and compassion from the refugees themselves.

“Many of them had seen very difficult situations: family members being killed in front of them, dealing with genocide and things like that…  and they themselves had to show mercy to the people who had harmed them and also mercy towards themselves by being good to themselves, and mercy, just in general, as a way of living their lives” he says.

Fr Martin reiterates that mercy and education are a 2-way street, that remind us that refugees are not simply objects of charity, but brothers and sisters.

“They are people we enter into a relationship with and learn from” he says.

“For my part I would like to see my home country, the United States, be much more open and welcoming to Syrian refugees” he says.

Fr Martin comments on a wave of xenophobia that seems to be gripping both the US and other countries.

“We have to remember – Fr Martin concludes - as the Pope continually says: ‘these are our brothers and sisters and we have a responsibility as Christians, as Catholics, as human beings to take care of people in these terrible situations”..