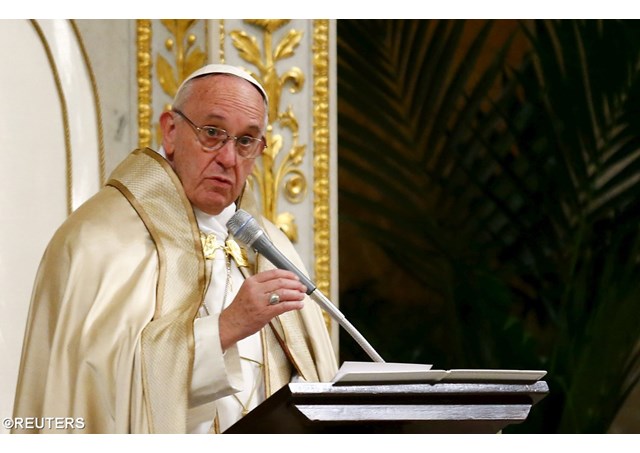 (Vatican Radio) Pope Francis delivered the homily at the closing Vespers of the Week of Prayer for Christian Unity in the Basilica of St. Paul "Outside the Walls" in Rome on Monday evening. Below, please find Vatican Radio's full English translation of the Holy Father's prepared remarks.

“I am the least of the Apostles … because I persecuted the Church of God. But by the grace of God I am what I am, and His grace in me was not without effect.” That’s how the Apostle Paul sums up the significance of his conversion. Coming after his dramatic encounter with the Risen Christ on the road from Jerusalem to Damascus, it is not primarily a moral conversion but rather an transforming experience of the grace of Christ, and at the same time, a call to the new mission of announcing to everyone the Jesus that he previously persecuted by persecuting the disciples of Christ. At that moment, in fact, Paul understands that there is a real and transcendent union between the eternally living Christ and his followers: Jesus lives and is present in them and they live in him. The vocation to be an Apostle is founded not on Paul’s human merits, which he considers to be ‘the least’ and ‘unworthy’, but rather on the infinite goodness of God who chose him and entrusted him with his ministry.

St Paul also bears witness to a similar understanding of what happened on the road to Damascus in his first letter to Timothy: I thank Christ Jesus our Lord, who has given me strength, that he considered me trustworthy, appointing me to his service. Even though I was once a blasphemer and a persecutor and a violent man, I was shown mercy because I acted in ignorance and unbelief. The grace of our Lord was poured out on me abundantly, along with the faith and love that are in Christ Jesus.” The overflowing mercy of God is the sole reason upon which Paul’s ministry is based and at the same time it is that which the Apostle must announce to the everyone.

The experience of St Paul is similar to that of the community to which the Apostle Peter writes his first letter. St Peter is writing to members of small and fragile communities, exposed to threats of persecution, and he applies to them the glorious titles attributed to the holy people of God: a chosen people, a royal priesthood, a holy nation, God’s special possession. For those first Christians, like today for all of us baptized Christians, it is a source of comfort and of constant amazement to know that we have been chosen to be part of God’s plan of salvation, put into effect through Jesus Christ and through the Church. “Why Lord? Why me? Why is it us?” Here we touch the mystery of mercy and of God’s choice. The Father loves us all and wants to save us all, and for this reason He calls some people conquering them through His grace, so that through them His love can reach all people. The mission of the whole people of God is to announce the marvelous works of the Lord, first and foremost the Pasqual mystery of Christ, through which we have passed from the darkness of sin and death to the splendor of His new and eternal life.

In light of the Word of God which we have been listening to, and which has guided us during this Week of Prayer for Christian Unity, we can truly affirm that all of us, believers in Christ, have been called to proclaim the mighty works of God. Beyond the differences which still separate us, we recognise with joy that at the origin of our Christian  life there is always a call from God Himself. We can make progress on the path to full visible communion between us Christians not only when we come closer to each other, but above all as we convert ourselves to the Lord, who through His grace, chooses and calls us to be His disciples. And converting ourselves means letting the Lord live and work in us. For this reason, when Christians of different Churches listen to the Word of God together and seek to put it into practice, they make important steps towards unity.it is not only the call which unites us, but we also share the same mission to proclaim to all the marvelous works of God. Like St Paul, and like the people to whom St Peter is writing, we too cannot fail to announce God’s merciful love which has conquered and transformed us. While we are moving towards full communion among Christians, we can already develop many forms of cooperation to aid the spread of the Gospel.  By walking and working together, we realise that we are already united in the name of the Lord.

In this Extraordinary Jubilee Year of Mercy, we must always keep in mind that there cannot be an authentic search for Christian unity without trusting fully in the Father’s mercy. We ask first of all for forgiveness for the sins of our divisions, which are an open wound in the Body of Christ. As Bishop of Rome and pastor of the Catholic Church, I want to ask for mercy and forgiveness for the behavior of Catholics towards Christians of other Churches which has not reflected Gospel values. At the same time, I invite all Catholic brothers and sisters to forgive if they, today or in the past, have been offended by other Christians. We cannot cancel out what has happened, but we do not want to let the weight of past faults continue to contaminate our relationships. God’s mercy will renew our relationships.

In this atmosphere of intense prayer, I extend fraternal greetings to his Eminence Metropolitan Gennadios, representing the Ecumenical Patriarch, to His Grace David Moxon, the Archbishop of Canterbury’s personal representative in Rome, and all the representatives of the other Churches and ecclesial communities who are gathered here this evening. With them we walked through the Holy Door of this Basilica to remind ourselves that the only door which leads to salvation is Jesus Christ our Lord, the merciful face of the Father. I cordially greet also the young Orthodox and Oriental Orthodox students who are here in Rome with the support of the Committee for Cultural Collaboration with the orthodox churches, working through the Council for the Promotion of Christian Unity, as well as the students from the Ecumenical Institute of Bossey who are visiting Rome to deepen their knowledge of the Catholic Church.

Dear brothers and sisters, let us unite ourselves with the prayer that Jesus Christ prayed to his Father: “May they be one, so that the world may believe”. Unity is the gift of mercy from God the Father. In front of the tomb of St Paul, the apostle and martyr, kept here in this splendid Basilica, we feel that our humble request is sustained by the intercession of the multitudes of Christian martyrs, past and present. They replied generously to the call of the Lord, they gave faithful witness with their lives to the wonderful works that God has done for us and they already enjoy full communion in the presence of God the Father. Sustained by their example and comforted by their intercessions, we make our humble prayer to God.