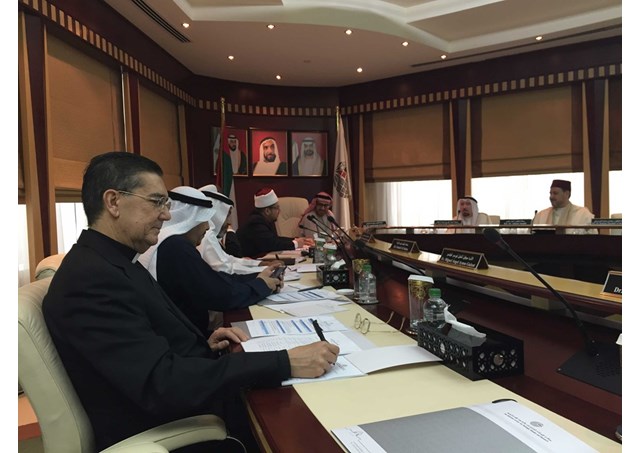 (Vatican Radio) Father Miguel Angel Ayuso Guixot, the Secretary of the Pontifical Council for Interreligious Dialogue, on Sunday said “to counter extremism we have to commit ourselves to a sincere dialogue.”

He was speaking at the First Arab Thinkers Forum at the Emirates Center for Strategic Studies and Research in Abu Dhabi.

“Pope Francis believes that the motivation for interreligious dialogue must rest in the mutual commitment to peace and justice, thus making them the basic principles for all exchanges,” Father Ayuso said. “Dialogue creates a school of humanity and becomes instrument of unity, helping to build a better society founded on mutual respect and friendship.”

The full text of Father Ayuso’s speech is below

The Emirates Center for Strategic Studies and Research

Let me express my deep gratitude to His Excellency Doctor Jamal Sanad Al Suwaidi, Director General of The Emirates Center for Strategic Studies and Research (ECSSR) for his invitation to participate in this First Arab Thinkers Forum, gathering here in Abu Dhabi intellectuals, scholars and religious leaders from around the world to brainstorm ideas with one another on the importance of promoting interreligious dialogue today to build together a more peaceful and fraternal world, so needed in this moment in which extremism prevails in many parts of the world underlining the urgency to promote counter remedies.

I will not pursue considerations on the manifold economic, political, social and cultural reasons for extremism, these are already known to us, and surely will be discussed in this Forum, Rather, I would prefer as a Christian, to recall Pope Francis’ recommendations to the International Community on how to construct peace which can serve to counter extremism.

Just a few days ago, on Monday 11 January 2016, Pope Francis, speaking to the Diplomatic Corps accredited to the Holy See, argued that “Extremism and fundamentalism find fertile soil not only in the exploitation of religion for purposes of power, but also in the vacuum of ideals and the loss of identity - including religious identity - which dramatically marks the so-called West. This vacuum gives rise to the fear which leads to seeing the other as a threat and an enemy, to closed-mindedness and intransigence in defending preconceived notions”. Yet the greatest challenge we face is that of overcoming indifference in order to work together for peace, a good which must constantly be sought, by the promotion of a “culture of encounter”.

The promotion of a “culture of encounter”, one that is “open and fruitful” with the other, “demands that we be ready to listen”.[1] Aware that today we live amongst a “wounded humanity”, Pope Francis believes that the motivation for interreligious dialogue must rest in the mutual commitment to peace and justice, thus making them the basic principles for all exchanges. In fact, interreligious dialogue is a necessary condition for peace in the world, and thus a duty for all of us.[2] Dialogue creates a school of humanity and becomes instrument of unity, helping to build a better society founded on mutual respect and friendship. “It is always worth remembering, however, that for dialogue to be authentic and effective, it presupposes a solid identity: without an established identity, dialogue is of no use or even harmful”.[3] For this, dialogue must be “friendly and sincere”.[4]

3. The Key Role of Religious Leaders

Extremist tendencies, irrespective of their origin, are actually among the most dangerous threats to world peace and security. Extremist movements introduce fundamental and sudden changes by imposing uncompromising and violent policies. They create an environment where mutual acceptance and understanding cannot co-exist. This gives way to various kinds of animosity toward people of different ideologies, race and beliefs.

Consequently, we must increase our awareness that extremism, with its violent tendencies, is incompatible with true religious ethics and thus must be defeated through a serious and widespread formation to dialogue. It needs genuine effort by religious leaders and opinion makers to identify those persons who portray false beliefs and behaviors as part of their religious ideology. At the same time, political leaders must support this campaign of awareness in order to prevent extremism in society and to lay the groundwork for moderation. “As religious leaders, we are obliged to denounce all violations against human dignity and human rights. Human life, a gift of God the Creator, possesses a sacred character. As such, any violence that seeks religious justification warrants the strongest condemnation because the Omnipotent is the God of life and peace. The world expects those who claim to adore God to be men and women of peace who are capable of living as brothers and sisters, regardless of ethnic, religious, cultural or ideological differences [...]. We, Muslims and Christians, are the bearers of spiritual treasures of inestimable worth [...] Recognizing and developing our common spiritual heritage - through interreligious dialogue - helps us to promote and to uphold moral values, peace and freedom in society”.[5]

4. Dialogue Must Be Sincere

Peace is not just a gift of God, it is also a personal and social duty that demands commitment and concerns everyone: “This means that all those forms which present a distorted use of religion, must be firmly refuted as false since they are unworthy of God or humanity. Authentic religion is a source of peace and not of violence! No one must use the name of God to commit violence! To kill in the name of God is a grave sacrilege. To discriminate in the name of God is inhuman [...]. What unites us is the path of life, is starting from our own identity for the good of our brothers and sisters. To do good! And so, we walk together as brothers and sisters. Every one of us offers the witness of our identity to others and engages in dialogue with others. Then dialogue can move onto theological questions. But even more important and beautiful is to walk together without betraying our own identity, without disguising it, without hypocrisy”.[6]

Dialogue, in fact, is a necessity, not a choice. To counter extremism we have to commit ourselves to a sincere dialogue: there can be no peace in the world without dialogue, especially among believers, who are by far the majority of humanity today. In all religions, there is a treasury of values that can contribute towards building a world of justice, peace, fraternity and prosperity.[7]

For this, interreligious dialogue poses today three challenges to us: “The first is the political challenge: to combine identity and openness, overcoming prejudice and fear. It is well to recognize each other's traditions that have their own value. Second, the intellectual challenge, which concerns the theological heritage and the encounter with modernity. We must help each other to practice discernment and not to neglect the new currents of theological and spiritual thought. Finally, the spiritual challenge: in today's world, more sensitive to witnesses than to teachers, we must recognize the message of peace to all religions. Calling for fraternity, they can look to the future with less confusion and fear”.[8]

5. The Importance of Prayer

“The world, looking to us believers, exhorts us to cooperate amongst ourselves and with men and women of goodwill who though professing no religion, ask us for effective responses regarding numerous issues: peace, hunger, the poverty that afflicts millions of people, the environmental crisis, violence, especially that committed in the name of religion, corruption, moral decay, the crisis of the family, of the economy, of finance, and especially the lack of hope. We believers have no recipe for these problems, but we have one great resource: prayer. As believers we pray. We must pray. Prayer is our treasure, which we draw from according to our respective traditions, to request the gifts for which humanity longs”.[9]

I thank you for your kind attention.

[5] Pope Francis, Visit to the President of the Diyanet at the Department for Religious Affairs, Ankara, 28 November 2014.

[6] Pope Francis, Meeting with the Leaders of Other Religions and Other Christian Denominations, Tirana 21 September 2014. Coptic Patriarch Tawadros II has also said in an interview, on the occasion of the Coptic Christmas (7 January 2016), that “terrorism does not make any distinction between Christians and Muslims, and even when it is fueled by religious ideology, it indiscriminately affects all believers in God, fomenting sectarian strife where people kill each other for "human stupidity" for "money" or to assert "their interests", http://www.fides.org/en/news/39142#.VpYsDcQmyG4

“AFRICA/EGYPT - Coptic Patriarch Tawadros: terrorism does not make any distinction between Christians and Muslims”

[7] Millions of other persons too, though they declare no belief in any religion, are at the same time bearers and promoters of these same values, not on a religious basis, but on the basis of human dignity. These too are people of good will, many of them with an acute sense of honesty, to whom we are called to extend our hands in fraternity and friendship, seeking collaboration for the common good, for a better world, as Pope Francis indicates: “The majority of people living on our planet profess to be believers. This should spur religions to dialogue among themselves for the sake of protecting nature, defending the poor, and building networks of respect and fraternity”, see Pope Francis, Laudato Si', n. 201.