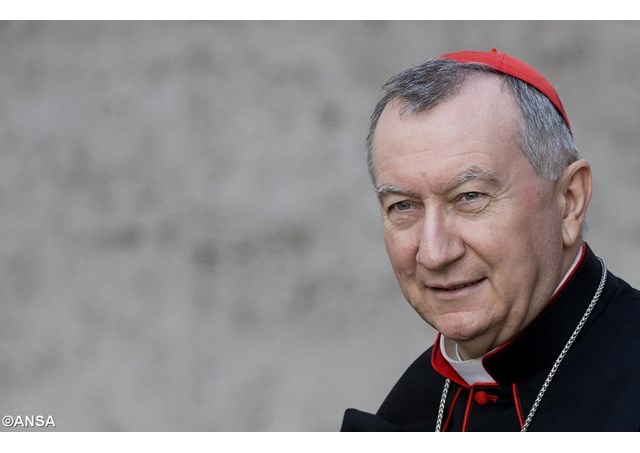 (Vatican Radio) Cardinal Pietro Parolin has expressed his support for the work of a Foundation dedicated to the construction of a world economic system at the service of an integral development.

The Vatican Secretary of State was speaking on Monday at a round table-meeting organized by the Global Foundation on the theme “Rejecting the globalisation of indifference – towards a more inclusive and sustainable global economy”.

The meeting took place on 17 and 18 January in Rome.

I am delighted to be able to attend, even if only briefly, this round-table meeting organised by the Global Foundation.  In keeping with the title of this gathering: “Rejecting the globalisation of indifference – towards a more inclusive and sustainable global economy”, your purpose is to seek a “more inclusive and sustainable global economy”, which might stand in contrast to the “globalisation of indifference”.  This is one of the initiatives which expresses the Global Foundation’s commitment to being a privileged place of dialogue between major economic and political players, as well as a catalyst for ideas for the construction of an economic system at the service of integral economic development.  I thank you sincerely for the kind invitation and I bring you the good wishes of the Holy Father, Pope Francis, and share with you his hope that this round-table might open up areas of reflection and offer meaningful paths of action on the topic in hand.

From the beginning of his Pontificate, faced with the many difficulties which afflict the world, the Pope has not failed to make clear, with real emphasis, the grave consequences of indifference and of the lack of responsibility.  Today’s meeting is thus in tune with the teaching of the Pope, who constantly calls for all people to commit themselves, freely and responsibly, to correcting an economy which causes exclusion and inequality.  He invites the rich and the poor, the powerful and simple folk, politicians and entrepreneurs to put the creative power of human intelligence at the service of the common good, with a spirit of solidarity and – I would add – mercy.

Without forgetting how much has been done in these first years of the third millennium to help people escape from extreme poverty, Pope Francis continues to underscore his conviction that much more still needs to be done, and that in times of crisis and economic hardship a spirit of global solidarity must not be lost.  It goes without saying – the Holy Father points out – that part of this great effort is the creation and distribution of wealth. Since the right use of natural resources, the proper application of technology and the harnessing of the spirit of enterprise are essential elements of an economy which seeks to be modern, inclusive and sustainable.  That will be possible, having in mind the definition of justice of the Roman jurist Ulpian and of St Augustine of Hippo – “Iustitia est constans et perpetua voluntas ius suum cuique tribuendi” (Justice is the constant and perpetual will to render to every man his due), which the Pope quoted in his address to the United Nations on 25th September 2015, with reference to the “2030 Agenda for Sustainable Development”, in order to say to those responsible for global affairs that our world demands of all government leaders a will which is effective, practical and constant, concrete steps and immediate measures for preserving and improving the natural environment and thus putting an end as quickly as possible to the phenomenon of social and economic exclusion .

Even if the aim of this round-table is not so much to provide definitive solutions, which are more the fruit of shared political action, I am convinced that this gathering will be an important space for encouraging an increase in global awareness of the serious problems of environmental degradation and exclusion.  It will thus provide a stimulus to strengthen the action which has already begun, and is starting to show positive and enduring results.

With these brief considerations, I reiterate the wish that these days might bring forth worthwhile contributions to encourage an economy which is increasingly at the service of our common home, which is the world as a whole.  Thank you.