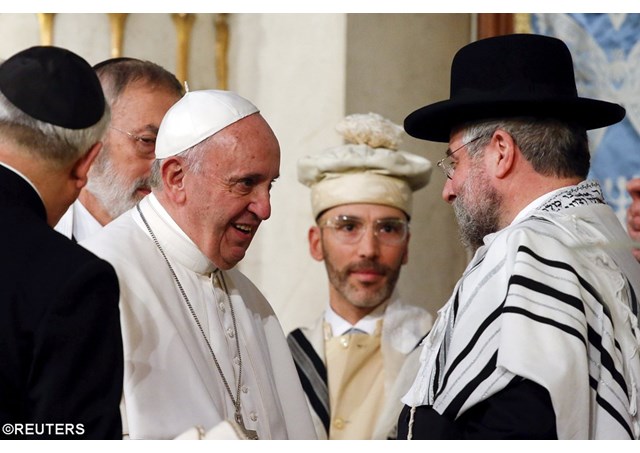 During the visit that featured welcome speeches by prominent members of Rome's Jewish community and a speech by the Pope, Francis greeted a number of people including several Holocaust survivors.

Pope Francis recalled the tragedy of the Holocaust and  paid  tribute to the over  2000 Jews who were deported by the Nazis from Rome in October 1943.

He said the past must serve as a lesson for the present and for the future and said the Holocaust teaches us that utmost vigilance is always needed to be able to take prompt action in defense of human dignity and peace.

The visit follows that of Pope Benedict XVI in January 2010 and the historic encounter of Pope Saint John Paul II with former Rabbi Elio Toaff in 1986.

It also comes on the heels of the publication, last December, of an important new document from the Vatican’s Commission for religious relations with Jews, exploring the theological developments during the past half century of dialogue between Catholics and Jews.

During his speech to those present Pope Francis highlighted how Catholic–Jewish relations are very close to his heart. He spoke of how a spiritual bond has been created between the two communities favouring the growth of a genuine friendship and giving life to a shared commitment.

We share a unique and special bond thanks to the Jewish roots of Christianity, he said, and we must feel like brothers, united by the same God and by a rich common spiritual patrimony upon which to build the future.

Pope Francis referred to the Second Vatican Council’s Declaration “Nostra Aetate” which made possible the systematic dialogue between the Catholic Church and Judaism and which set the ground for Jewish-Catholic dialogue. He encouraged all those involved in this dialogue to continue in this direction with discernment and perseverance.

The Pope also said that, along with theological issues, we must not lose sight of the big challenges facing the world today. He said Christians and Jews can and must offer humanity the message of the Bible regarding the care of creation as well as always promote and defend human life.

We must pray with insistence to help us put into practice the logic of peace, reconciliation, forgiveness, life, in Europe, the Holy Land, the Middle East, Africa and elsewhere in the world. He concluded saying we have to be thankful for all that has been realized in the last fifty years of Catholic-Jewish dialogue because between us mutual understanding, mutual trust and friendship have grown and deepened.

Please find below Vatican Radio’s translation of the Pope’s address:

I'm happy to be here today with you in this Synagogue. I thank Dr. Di Segni, Mrs  Durighello and Mr Gattegna for their kind words. And  I thank you all for your warm welcome, thank you! Tada Toda Rabba, thank you!

During my first visit to this synagogue as Bishop of Rome, I wish to express to you and to extend to all Jewish communities, the fraternal greetings of peace of the whole Catholic Church.

Our relations are very close to my heart. When in Buenos Aires I used to go to the synagogues and meet the communities gathered there, I used to follow Jewish festivities and commemorations and give thanks to the Lord who gives us life and accompanies us on the path of history. Over time, a spiritual bond has been created which has favoured the birth of a genuine friendship and given life to a shared commitment. In interreligious dialogue it is essential that we meet as brothers and sisters before our Creator and to Him give praise, that we respect and appreciate each other and try to collaborate. In Jewish-Christian dialogue there is a unique and special bond thanks to the Jewish roots of Christianity: Jews and Christians must therefore feel as brothers, united by the same God and by a rich common spiritual patrimony (cf. Declaration. Nostra Aetate, 4 ), upon which to build the future.

With this visit I follow in the footsteps of my predecessors. Pope John Paul II came here thirty years ago, on 13 April 1986; and Pope Benedict XVI was amongt you six years ago. On that occasion John Paul II coined the beautiful description "elder brothers", and in fact you are our brothers and sisters in the faith. We all belong to one family, the family of God, who accompanies and protects us, His people. Together, as Jews and as Catholics, we are called to take on our responsibilities towards this city, giving first of all a spiritual contribution, and favouring the resolution of various current problems. It is my hope that closeness, mutual understanding and respect between our two  communities continue to grow. Thus, it is significant that I have come among you today, on January 17, the day when the Italian Episcopal Conference celebrates the "Day of dialogue between Catholics and Jews."

We have just commemorated the 50th anniversary of the Second Vatican Council’s Declaration “Nostra Aetate” which made possible the systematic dialogue between the Catholic Church and Judaism. On 28 October last, in St. Peter's Square, I was able to greet a large number of Jewish representatives to whom I said “Deserving of special gratitude to God is the veritable transformation of Christian-Jewish relations in these 50 years. Indifference and opposition have changed into cooperation and benevolence. From enemies and strangers we have become friends and brothers. The Council, with the Declaration Nostra Aetate, has indicated the way: “yes” to rediscovering Christianity’s Jewish roots; “no” to every form of anti-Semitism and blame for every wrong, discrimination and persecution deriving from it.” Nostra Aetate explicitly defined theologically for the first time the Catholic Church's relations with Judaism. Of course it did not solve all the theological issues that affect us, but we it provided an important stimulus for further necessary reflections. In this regard, on 10 December 2015, the Commission for Religious Relations with the Jews published a new document that addresses theological issues that have emerged in recent decades since the promulgation of “Nostra Aetate”. In fact, the theological dimension of Jewish-Catholic dialogue deserves to be more thorough, and I wish to encourage all those involved in this dialogue to continue in this direction, with discernment and perseverance. From a theological point of view, it is clear there is an inseparable bond between Christians and Jews. Christians, to be able to understand themselves, cannot not refer to their Jewish roots, and the Church, while professing salvation through faith in Christ, recognizes the irrevocability of the Covenant and God’s constant and faithful love for Israel .

Along with theological issues, we must not lose sight of the big challenges facing the world today.  That of an integral ecology is now a priority, and us Christians and Jews can and must offer humanity the message of the Bible regarding the care of creation. Conflicts, wars, violence and injustices open deep wounds in humanity and call us to strengthen a commitment for peace and justice. Violence by man against man is in contradiction with any religion worthy of that name, and in particular with the three great monotheistic religions. Life is sacred, a gift of God. The fifth commandment of the Decalogue says: "Thou shalt not kill" (Exodus 20:13). God is the God of life, and always wants to promote and defend it; and we, created in his image and likeness, are called upon to do the same. Every human being, as a creature of God, is our brother, regardless of his or her origin or religious affiliation. Each person must be viewed with favour, just as God does, who offers his merciful hand to all, regardless of their faith and of their belonging, and who cares for those who most need him: the poor, the sick, the marginalized , the helpless. Where life is in danger, we are called even more to protect it. Neither violence nor death will have the last word before God,  the God of love and life. We must pray with insistence to help us put into practice the logic of peace, of reconciliation, of forgiveness, of life, in Europe, in the Holy Land, in the Middle East, in Africa and elsewhere in the world.

In its history, the Jewish people has had to experience violence and persecution, to the point of  extermination of European Jews during the Holocaust. Six million people, just because they belonged to the Jewish people, were victims of the most inhumane barbarity perpetrated in the name of an ideology that wanted to replace God with man. On October 16, 1943, over a thousand men, women and children Rome’s Jewish community were deported to Auschwitz. Today I wish to remember them in a special way: their suffering, their fear, their tears must never be forgotten. And the past must serve as a lesson for the present and for the future. The Holocaust teaches us that utmost vigilance is always needed to be able to take prompt action in defense of human dignity and peace. I would like to express my closeness to every witness of the Holocaust who is still living; and I address a special greeting to those who are present here today.

Dear brothers, we really have to be thankful for all that has been realized in the last fifty years, because between us mutual understanding, mutual trust and friendship have grown and deepened. Let us pray together to the Lord, to lead the way to a better future. God has plans of salvation for us, as the prophet Jeremiah says: "I know well the plans I have in mind for you—oracle of the Lord - plans for your welfare and not for woe, so as to give you a future of hope" (Jer 29 , 11). “The LORD bless you and keep you! The LORD let his face shine upon you, and be gracious to you! The LORD look upon you kindly and give you peace!  (cf. 6.24 to 26 Nm). Shalom Alechem!