Pope makes surprise visit to homes for elderly and disabled 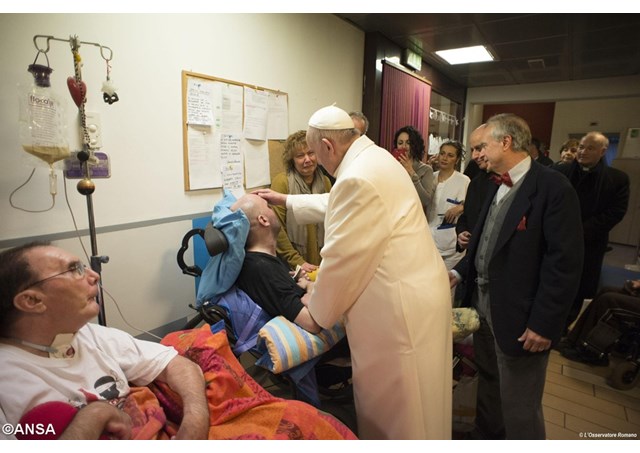 (Vatican Radio) In a surprise move on Friday afternoon Pope Francis continued with his program of putting mercy into practice during this Jubilee Year by visiting two homes for elderly and disabled people on the outskirts of Rome.

A statement from the press office said there was great surprise and joy among the 33 residents of the Bruno Buozzi home for the elderly as the Pope spent talking to each one of them. He was accompanied by Archbishop Rino Fisichella, head of the Vatican’s Council for New Evangelisation and one of the principle organisers of activities during this Jubilee Year of Mercy.

Pope Francis has repeatedly emphasized the great value of the elderly and particularly the important role of grandparents in the Church and in society.

Before returning to the Vatican, Pope Francis also visited the nearby Casa Iride where six severely disabled patients in a vegetative state are cared for by their families and by a team of medical staff.

Today’s visits were part of the Pope’s decision to make some practical gestures of charity on one Friday of each month throughout this Year of Mercy.