Pope at Mass: faith is a gift, it is ours for the asking 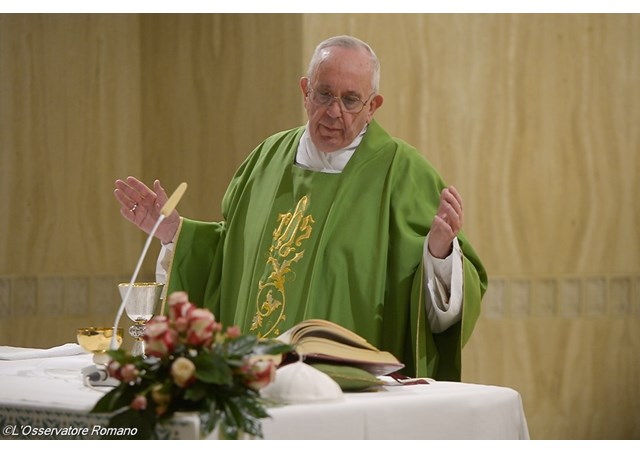 (Vatican Radio) Faith always wins, because it turns even defeat into victory, but it is not something “magical” – it is a personal relationship with God that cannot be learned in books, and is in fact a gift from God, a gift that is our for the asking: this was the essence of Pope Francis’ reflections following the Readings of the Day at Mass on Thursday morning in the chapel of the Casa Santa Marta in the Vatican.

Taken from the Book of Samuel, the First Reading told of the defeat of the People of God at the hands of the Philistines. “the slaughter was very great,” and the people lost everything, “[even] their dignity.” The Holy Father asked, “What led to this defeat?” and answered that the people, “slowly walked away from the Lord, lived in a worldly fashion, and even kept with idols.” The people went out to the Sanctuary of Shiloh, but, “as if it were a mere cultural habit – they had lost their filial relationship with God – they did not worship God – and He left them alone. The people even used the Ark of the Covenant to win the battle, though they did so as though the Ark were a sort of magical talisman. “In the Ark,” recalled Pope Francis, “was the Law – the Law that they did not keep and which they had abandoned.” There was no longer “a personal relationship with the Lord – they had forgotten the God who had saved them,” and were defeated. 30 thousand Israelites were slain, the Ark was taken by the Philistines, the two sons of Eli, “those criminal priests who exploited people in the Sanctuary of Shiloh,” met their end. It was, “A total defeat,” the Pope said. “Thus does a people that has distanced itself from God meet its end.”

The Gospel of the day, however, speaks of a victory:

“At that time, a leper came to Jesus and begged him on his knees – precisely in a gesture of adoration – and said, ‘Look, you can make me clean.’ He challenged the Lord, saying, ‘I have been defeated in life – the leper had suffered defeat, insofar as he could not live life in common with others, he was always cast off – but you [he said to the Lord] can turn this defeat into victory!.’ That is: ‘Look, you can make me clean.’ Before this Jesus had compassion, he stretched out his hand, touched him and said, ‘I desire that you be made clean!’ So, simply: this fight is over in two minutes and ends in victory; that other last all day long, and ends with the defeat. The man had something that drove him to go to Jesus and send up the challenge: he had faith.”

The Apostle John says that the victory over the world is our faith. “Our faith wins, always!”:

“Faith is the victory. Faith: like [that of] this man [who said], ‘If you want to, you can do it.’ The losers of the First Reading prayed to God, bearing the ark, but they had no faith, they had forgotten it. This leper had faith, and when you ask with faith, Jesus himself told us mountains will move. We are able to move a mountain from one place to another: faith is capable of this. Jesus himself said, ‘Whatever you ask the Father in my name, you will be given. Ask and you shall receive; knock and it shall be opened,’ but with faith – and this this is our victory.”

Pope Francis concluded his remarks to the faithful with this prayer:

“We ask the Lord that our prayers always have that root of faith, that they be born of faith in Him. The grace of faith: faith is a gift. You do not learn from books. It is a gift that the Lord gives you, but just ask for it: ‘Give me faith!’ ‘I believe, Lord!’, said the man who asked Jesus to heal his son: ‘I ask Lord, that you help my unbelief.’ Prayer with faith ... and the man is healed. We ask God for the grace to pray with faith, to be sure that everything we ask of Him we will be given, with the confidence that faith gives us – and this is our victory, our faith.”