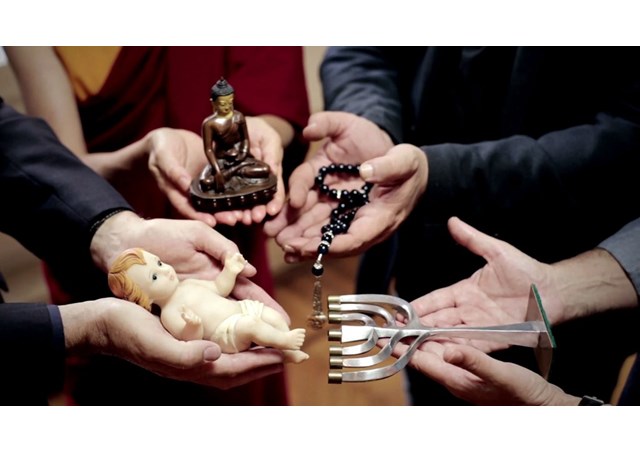 (Vatican Radio) Revealing his prayer intention for January, Pope Francis says he is praying so that “sincere dialogue between men and women of different religions may yield fruits of peace and justice”.

For the first time the Pope’s traditional monthly prayer intention is available on video, thanks to a new initiative launched by the worldwide Apostleship of Prayer.

The video-message is in Spanish, with subtitles in 10 different languages.

It shows Pope Francis together with believers of other religions – Jewish, Muslim, Buddhist - each of whom professes his or her faith and all together declare they believe in love.

You can watch the video here.

“Most of the planet's inhabitants declare themselves believers – says Pope Francis - This should lead to dialogue among religions”.

“Sólo con el diálogo, eliminaremos la intolerancia…”
“Only through dialogue – he says – will we be able to eliminate intolerance and discrimination”. Interreligious dialogue is “a necessary condition for world peace”. “We must not cease praying for it or collaborating with those who think differently”.

“Confío en vos para difundir mi petición…”
“I hope that you – the Pope says – will spread my prayer request for this month: that sincere dialogue between men and women of different religions may produce the fruits of peace and justice”. There are many people – he continues – “who think and who feel differently. They search for God or meet God in different ways”. “Some declare themselves to be agnostic, they do not know whether God exists. Others say they are atheists”.

“En esta multitud, en este abanico de religiones…”
“Within this multitude – Pope Francis concludes – in this wide range of religions and lack of religious, there is one certainty: we are all children of God”.

“I have confidence in your prayers”.