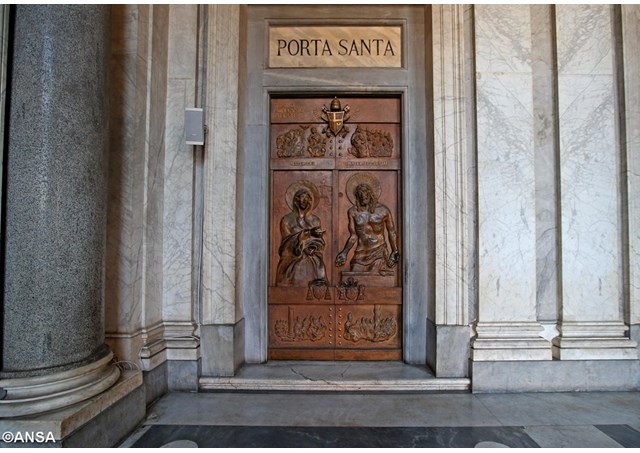 The Basilica of St Mary Major, also known as Our Lady of the Snows, is one of the oldest churches dedicated to the Mother of God, and the largest in the world. So it was particularly appropriate that the Pope chose the Solemnity of Mary the Mother of God to open the Holy Door at one of Rome’s most beloved churches.

Earlier, on the feast of the Immaculate Conception, the Holy Father solemnly opened the Holy Door at St Peter’s basilica to inaugurate the Jubilee Year of Mercy; a few days later, he presided at the opening of the Holy Door at Rome’s Cathedral, the Archbasilica of St John Lateran. The Holy Door at St Paul’s “Outside-the-Walls” was opened by the Archpriest of that Basilica, Cardinal James Harvey.

Since the Jubilee Year of 1500, Holy Doors have been opened at all four of the Major Basilicas in Rome. For the Jubilee of Mercy, Pope Francis has also opened a Holy Door at a homeless shelter at Rome’s central train station, and, during his trip to the Central African Republic, the Holy Door at the Cathedral in Bangui, the nation’s capital. The Holy Father has also extended permission to Bishops around the world to open Holy Doors in their own Diocese. Those passing through a Holy Door, whether in Rome or elsewhere throughout the world, are able to obtain a plenary indulgence, under the usual conditions. In his Bull Misericordiae Vultus, formally proclaiming the Jubilee Year of Mercy, Pope Francis said, “the Holy Door will become a Door of Mercy through which anyone who enters will experience the love of God who consoles, pardons, and instils hope.”

Below, please find the official translation of the prepared text for Pope Francis’ homily at the Papal Basilica of Saint Mary Major:

With this invocation we turn to the Blessed Virgin Mary in the Roman Basilica dedicated to her under the title of Mother of God. It is the first line of an ancient hymn which we will sing at the conclusion of this Holy Eucharist. Composed by an unknown author, it has come down to us as a heartfelt prayer spontaneously rising up from the hearts of the faithful: “Hail Mother of mercy, Mother of God, Mother of forgiveness, Mother of hope, Mother of grace and Mother full of holy gladness”. In these few words we find a summary of the faith of generations of men and women who, with their eyes fixed firmly on the icon of the Blessed Virgin, have sought her intercession and consolation.

It is most fitting that on this day we invoke the Blessed Virgin Mary above all as Mother of mercy. The door we have opened is, in fact, a Door of Mercy. Those who cross its threshold are called to enter into the merciful love of the Father with complete trust and freedom from fear; they can leave this Basilica knowing that Mary is ever at their side. She is the Mother of mercy, because she bore in her womb the very Face of divine mercy, Jesus, Emmanuel, the Expectation of the nations, the “Prince of Peace” (Is 9:5). The Son of God, made incarnate for our salvation, has given us his Mother, who joins us on our pilgrimage through this life, so that we may never be left alone, especially at times of trouble and uncertainty.

Mary is the Mother of God who forgives, who bestows forgiveness, and so we can rightly call her Mother of forgiveness. This word – “forgiveness” – so misunderstood in today’s world, points to the new and original fruit of Christian faith. A person unable to forgive has not yet known the fullness of love. Only one who truly loves is able to forgive and forget. At the foot of the Cross, Mary sees her Son offer himself totally, showing us what it means to love as God loves. At that moment she heard Jesus utter words which probably reflected what he had learned from her as a child: “Father, forgive them; for they do not know what they are doing” (Lk 23:24). At that moment, Mary became for all of us the Mother of forgiveness. Following Jesus’ example and by his grace, she herself could forgive those who killed her innocent Son.

For us, Mary is an icon of how the Church must offer forgiveness to those who seek it. The Mother of forgiveness teaches the Church that the forgiveness granted on Golgotha knows no limits.  Neither the law with its quibbles, nor the wisdom of this world with its distinctions, can hold it back. The Church’s forgiveness must be every bit as broad as that offered by Jesus on the Cross and by Mary at his feet. There is no other way. It is for this purpose that the Holy Spirit made the Apostles the effective ministers of forgiveness, so what was obtained by the death of Jesus may reach all men and women in every age (cf. Jn 20:19-23).

The Marian hymn continues: “Mother of hope and Mother of grace, Mother of holy gladness”. Hope, grace and holy gladness are all sisters: they are the gift of Christ; indeed, they are so many names written on his body. The gift that Mary bestows in offering us Jesus is the forgiveness which renews life, enables us once more to do God’s will and fills us with true happiness. This grace frees the heart to look to the future with the joy born of hope. This is the teaching of the Psalm: “Create in me a clean heart, O God, and put a new and right spirit within me. […] Restore to me the joy of your salvation” (51:10,12). The power of forgiveness is the true antidote to the sadness caused by resentment and vengeance. Forgiveness leads to joy and serenity because it frees the heart from thoughts of death, whereas resentment and vengeance trouble the mind and wound the heart, robbing it of rest and peace.

Let us, then, pass through the Holy Door of Mercy knowing that at our side is the Blessed Virgin Mary, the Holy Mother of God, who intercedes for us. Let us allow her to lead us to the rediscovery of the beauty of an encounter with her Son Jesus. Let us open wide the doors of our heart to the joy of forgiveness, conscious that we have been given new confidence and hope, and thus make our daily lives a humble instrument of God’s love.

And with the love and affection of children, let us cry out to Our Lady as did the faithful people of God in Ephesus during the historic Council: “Holy Mother of God!”