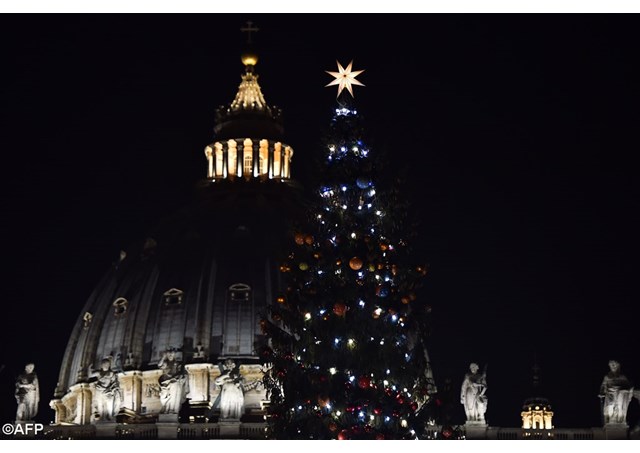 (Vatican Radio) The lights on the Christmas tree and crib scene in St Peter’s Square were officially lit up during a ceremony on Friday. Standing 32 metres high, this year’s tree was donated by the German state of Bavaria whilst the crib scene with its 24 life-sized figures was donated by the Italian archdiocese of Trento.

In an earlier address to thank the Bavarian authorities and representatives from Trento for their donation, Pope Francis said the Christmas crib scene reminds us that Jesus made himself small like a child to touch our hearts with his humble goodness. Declaring that God doesn’t like the revolutions of the powerful, he spoke of how through his poverty Jesus gives a jolt to those who are scurrying to accumulate the false treasures of this world.

The Pope also said the nativity scene reveals how Jesus never imposes himself by force but came into this world in simplicity, humility and meekness.  The crib scene, he said, speaks to us of God’s tenderness and his divine mercy and how He wants to move our hearts.

Standing at the base of the Christmas tree, the nativity scene is made up of 24 figures which were carved from wood grown in Trentino region of northern Italy and then painted. The scene includes one of the male figures bending to help an old man to symbolize the theme of mercy at the heart of this Jubilee year.

The Christmas tree in St Peter’s Square is adorned with particularly colourful decorations this year. The Vatican joined forces with the Lene Then Foundation, creating designs made by children suffering from cancer. The youngsters were asked to come up with designs that represent their dreams and wishes.