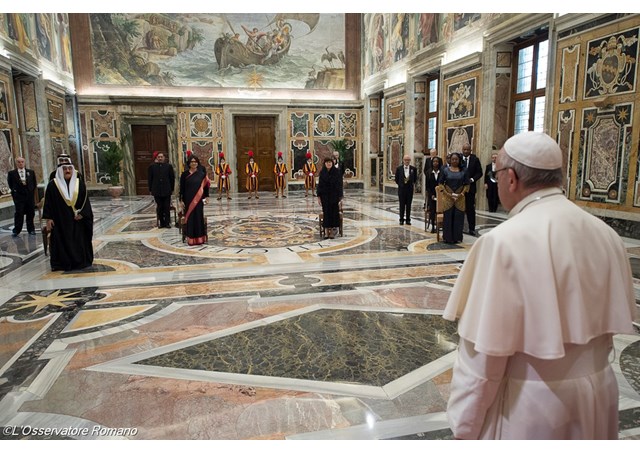 (Vatican Radio) Pope Francis on Thursday said today’s globalization of indifference is rooted in a distorted or unbalanced humanism in which “man has taken the place of God and therefore has become in turn a victim of various forms of idolatry.” At the same time, he pointed to a positive development, saying we are witnessing from those with more mature consciences a growing “non-violent reaction” to the wars and terrorism that have marked this year. The Pope’s remarks came in an address to the Ambassadors from India, Latvia, Guinea and Bahrain to the Holy See who were presenting their Letters of Credence.

In his discourse, Pope Francis urged the Ambassadors to work together to promote a culture of solidarity in our world that can help counteract the globalization of indifference which, he said, is unfortunately “one of the negative trends of our times”. Whilst recognizing that this attitude of indifference can take many different forms and there are many causes that help to feed it, Pope Francis said its roots can be found in today’s “distorted humanism in which man has taken the place of God.”  As a result of this, he added, “mankind has become in turn a victim of various forms of idolatry.”

He went on to say that “indifference towards God, towards our neighbour and towards the environment is inter-linked” and each helps to feed the other.  Saying this indifference can only be counteracted with a response that tackles all three elements, the Pope called for “a renewed humanism that reinstates human beings in their correct relationship with the Creator, with others and with creation.”

In order to achieve this aim, said Pope Francis, we need to promote a culture of solidarity and sharing and this requires the active involvement of political, social, cultural and educational leaders, as well as the mass media that nowadays exert a strong influence on personal and social attitudes.

Noting that 2015 unfortunately has been marked by a growing number of violent conflicts and terrorist attacks, Pope Francis said there was some good news as this situation was triggering “a growing non-violent reaction” that is spiritual and moral among those with more mature consciences. He said the Catholic Church through its Jubilee of Mercy wishes to encourage this process by spreading throughout the world the spirit of forgiveness and reconciliation.