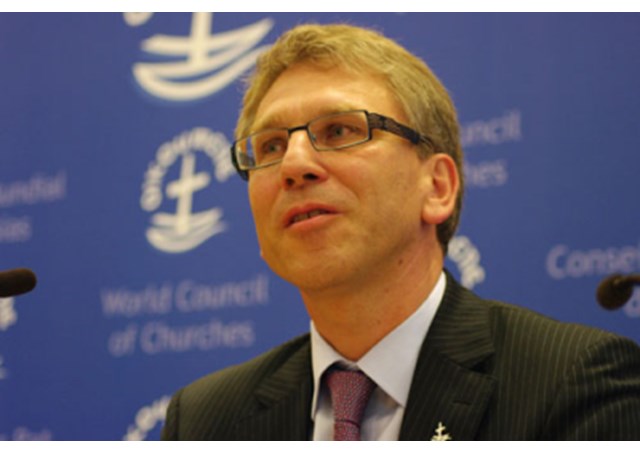 (Vatican Radio) World leaders have hailed the climate change agreement they struck in Paris at the weekend as historic, while some environmentalists have warned the deal does not go far enough to curb the effects of global warming on our planet. Financial analysts meanwhile have described the summit’s outcome as the most important climate agreement since the 1997 Kyoto Protocol, saying it will boost the world's low carbon-emissions economy.

Leaders of the Christian Churches and other faith communities also played a vital role in Paris, representing the voice of the poorest communities who are worst effected by climate change.

Pope Francis on Sunday urged the international community to urgently follow up on the path set by the agreement, paying special attention “for the most vulnerable populations”.

Among the Christian leaders addressing the talks in Paris was the General Secretary of the World Council of Churches, Rev Dr Olav Fykse Tveit. He was in Rome this week for talks with Cardinal Peter Turkson of the Pontifical Justice and Peace Council and members of the St Egidio community. Rev Fykse Tveit spoke to Philippa Hitchen about his hopes and his expectations following the historic agreement…

Rev Fykse Tveit says he told the politicians in Paris that all people – but especially the most vulnerable – have a right to hope that the world leaders would show responsibility towards all of humanity and not just the interests of their own countries.

He says the agreement is an important symbol of this and that politicians, business leaders, researchers, the civil sector and the religious communities now need to “speak the same language” to press for monitoring and implementation.

Faith leaders, he says, need to be “both strong in the conviction that (implementation) is possible” and hold the world leaders accountable to the commitments they have made. In Paris, he says, there was an interaction between civil society, the most vulnerable communities and politicians, “working together in ways we haven’t seen before”.

The religious discourse – especially Pope Francis’ encyclical – he says, has had an impact and “now it’s time to follow up”.

Regarding the recent refugee crisis that has caused tensions in many European countries, including his own nation, Norway, Rev Fykse Tveit praises the Norwegian Council of Churches for calling for the legal rights of refugees to be respected. He says there is a growing ecumenical and interfaith movement opposing the skepticism and proposing a more hospitable approach

There is a strong role for the Churches, he says, to combat the current fears and show that “our own security and wellbeing is not only defined by protecting our resources, but by making sure we live in a world of peace and justice, dealing with each other in a decent way”.

Rev Fykse Tveit also speaks about the Jubilee Year, inaugurated by Pope Francis earlier this month, saying it offers an ecumenical challenge, as well as opportunity for the “worldwide fellowship of humanity” to see that we need mercy “to be able to find a way forward”.

Finally the WCC leaders shares some of the priorities of the ecumenical body for the coming year: firstly, to look at what Christians can say together to combat the use of religion to justify violence; secondly to follow up on the climate change achievements; and thirdly to pursue the search for justice and peace, especially in the Middle East.