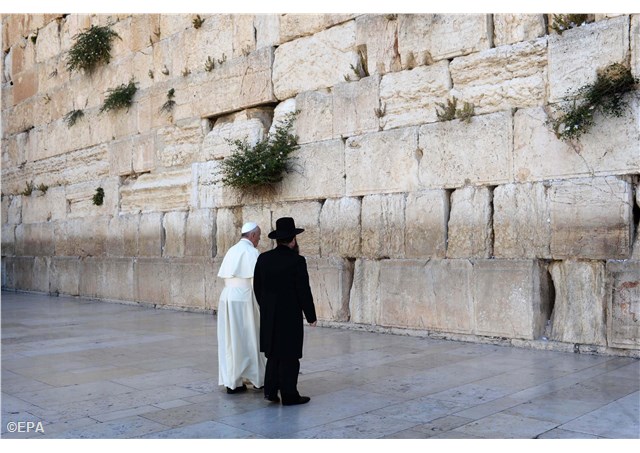 (Vatican Radio) For the first time since the Second Vatican Council changed Christian teachings toward Judaism and the Jewish people 50 years ago, a group of Orthodox rabbis have issued a public statement advocating partnership with Christians and appreciating the religious value of Christianity.

Published on December 3rd on the website of the Center for Jewish-Christian Understanding and Cooperation (CJCUC) in Israel, “To Do the Will of Our Father in Heaven: Toward a Partnership between Jews and Christians” is signed by over 25 prominent Orthodox rabbis in Israel, United States and Europe and calls for cooperation between Jews and Christians to address the moral and religious challenges of our times. The proclamation’s authors are inviting fellow Orthodox rabbis to join in signing the statement.

“The real importance of this Orthodox statement is that it calls for fraternal partnership between Jewish and Christian religious leaders, while also acknowledging the positive theological status of the Christian faith. Jews and Christians must be in the forefront of teaching basic moral values to the world,” said Rabbi Shlomo Riskin, one of the statement’s initiators, and founder of CJCUC, member of the Israeli Rabbinate and the Chief Rabbi of Efrat. While not a direct response to the Church’s 1965 “Nostra Aetate,” “To Do the Will of Our Father in Heaven” was clearly influenced by Christianity’s new affirmation of the eternity of the Jewish covenant and the respect that Christian leaders have demonstrated toward Judaism and Jews in contemporary dialogues and religious encounters.

“Jewish thinkers have previously crafted statements like Dabru Emet in 2000 on Jewish-Christian relations and theology, but few Orthodox rabbis could go along with those theological and practical claims in light of their understanding of Jewish tradition. This proclamation’s breakthrough is that influential Orthodox rabbis across all centers of Jewish life have finally acknowledged that Christianity and Judaism are no longer engaged in a theological duel to the death and that Christianity and Judaism have much in common spiritually and practically. Given our toxic history, this is unprecedented in Orthodoxy.” said Rabbi Dr. Eugene Korn, Academic Director of CJCUC.

The statement cites traditional opinions by past rabbinic authorities to justify partnership with Christians and religious appreciation of Christianity. “We understand that there is room in traditional Judaism to see Christianity as part of God’s covenantal plan for humanity, as a development out of Judaism that was willed by God,” said Rabbi Irving Greenberg, perhaps the most active Orthodox theologian in Jewish-Christian dialogue and covenantal theology. Another of the statement’s initiators, Jerusalem’s Rabbi David Rosen, International Director of Interreligious Affairs of the American Jewish Committee, added, “We need to work together to meet our common challenges: the assault of radical secularism, religious extremism and moral relativism on the heritage and dignity of humankind.”

To Do the Will of Our Father in Heaven:

Toward a Partnership between Jews and Christians

After nearly two millennia of mutual hostility and alienation, we Orthodox Rabbis who lead communities, institutions and seminaries in Israel, the United States and Europe recognize the historic opportunity now before us. We seek to do the will of our Father in Heaven by accepting the hand offered to us by our Christian brothers and sisters. Jews and Christians must work together as partners to address the moral challenges of our era.

1.     The Shoah ended 70 years ago. It was the warped climax to centuries of disrespect, oppression and rejection of Jews and the consequent enmity that developed between Jews and Christians. In retrospect it is clear that the failure to break through this contempt and engage in constructive dialogue for the good of humankind weakened resistance to evil forces of anti-Semitism that engulfed the world in murder and genocide.

2.     We recognize that since the Second Vatican Council the official teachings of the Catholic Church about Judaism have changed fundamentally and irrevocably. The promulgation of Nostra Aetate fifty years ago started the process of reconciliation between our two communities. Nostra Aetate and the later official Church documents it inspired unequivocally reject any form of anti-Semitism, affirm the eternal Covenant between G-d and the Jewish people, reject deicide and stress the unique relationship between Christians and Jews, who were called “our elder brothers” by Pope John Paul II and “our fathers in faith” by Pope Benedict XVI. On this basis, Catholics and other Christian officials started an honest dialogue with Jews that has grown during the last five decades. We appreciate the Church’s affirmation of Israel’s unique place in sacred history and the ultimate world redemption. Today Jews have experienced sincere love and respect from many Christians that have been expressed in many dialogue initiatives, meetings and conferences around the world.

3.     As did Maimonides and Yehudah Halevi,[1] we acknowledge that Christianity is neither an accident nor an error, but the willed divine outcome and gift to the nations. In separating Judaism and Christianity, G-d willed a separation between partners with significant theological differences, not a separation between enemies. Rabbi Jacob Emden wrote that “Jesus brought a double goodness to the world. On the one hand he strengthened the Torah of Moses majestically… and not one of our Sages spoke out more emphatically concerning the immutability of the Torah. On the other hand he removed idols from the nations and obligated them in the seven commandments of Noah so that they would not behave like animals of the field, and instilled them firmly with moral traits…..Christians are congregations that work for the sake of heaven who are destined to endure, whose intent is for the sake of heaven and whose reward will not denied.”[2] Rabbi Samson Raphael Hirsch taught us that Christians “have accepted the Jewish Bible of the Old Testament as a book of Divine revelation. They profess their belief in the G-d of Heaven and Earth as proclaimed in the Bible and they acknowledge the sovereignty of Divine Providence.”[3] Now that the Catholic Church has acknowledged the eternal Covenant between G-d and Israel, we Jews can acknowledge the ongoing constructive validity of Christianity as our partner in world redemption, without any fear that this will be exploited for missionary purposes. As stated by the Chief Rabbinate of Israel’s Bilateral Commission with the Holy See under the leadership of Rabbi Shear Yashuv Cohen, “We are no longer enemies, but unequivocal partners in articulating the essential moral values for the survival and welfare of humanity”.[4] Neither of us can achieve G-d’s mission in this world alone.

4.     Both Jews and Christians have a common covenantal mission to perfect the world under the sovereignty of the Almighty, so that all humanity will call on His name and abominations will be removed from the earth. We understand the hesitation of both sides to affirm this truth and we call on our communities to overcome these fears in order to establish a relationship of trust and respect. Rabbi Hirsch also taught that the Talmud puts Christians “with regard to the duties between man and man on exactly the same level as Jews. They have a claim to the benefit of all the duties not only of justice but also of active human brotherly love.” In the past relations between Christians and Jews were often seen through the adversarial relationship of Esau and Jacob, yet Rabbi Naftali Zvi Berliner (Netziv) already understood at the end of the 19th century that Jews and Christians are destined by G-d to be loving partners: “In the future when the children of Esau are moved by pure spirit to recognize the people of Israel and their virtues, then we will also be moved to recognize that Esau is our brother.”[5]

5.     We Jews and Christians have more in common than what divides us: the ethical monotheism of Abraham; the relationship with the One Creator of Heaven and Earth, Who loves and cares for all of us; Jewish Sacred Scriptures; a belief in a binding tradition; and the values of life, family, compassionate righteousness, justice, inalienable freedom, universal love and ultimate world peace. Rabbi Moses Rivkis (Be’er Hagoleh) confirms this and wrote that “the Sages made reference only to the idolator of their day who did not believe in the creation of the world, the Exodus, G-d’s miraculous deeds and the divinely given law. In contrast, the people among whom we are scattered believe in all these essentials of religion.”[6]

6.     Our partnership in no way minimizes the ongoing differences between the two communities and two religions. We believe that G-d employs many messengers to reveal His truth, while we affirm the fundamental ethical obligations that all people have before G-d that Judaism has always taught through the universal Noahide covenant.

7.     In imitating G-d, Jews and Christians must offer models of service, unconditional love and holiness. We are all created in G-d’s Holy Image, and Jews and Christians will remain dedicated to the Covenant by playing an active role together in redeeming the world.

[4] Fourth meeting of the Bilateral Commission of the Chief Rabbinate of Israel and the Holy See’s Commission for Religious Relations with Jewry, Grottaferrata, Italy (19 October 2004).