Pope Francis: Homily for Inauguration of the Jubilee 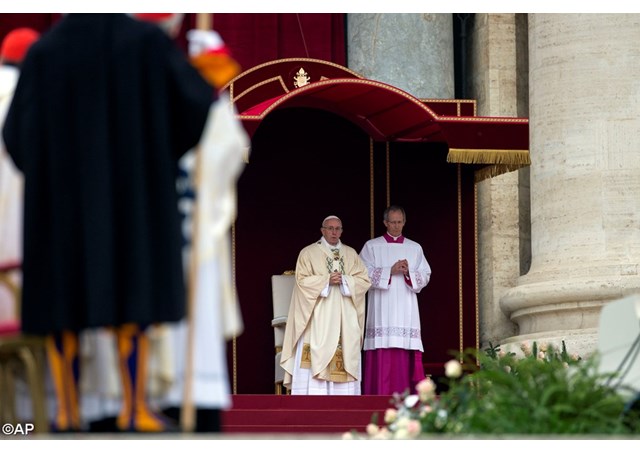 (Vatican Radio) On Tuesday, the Solemnity of the Immaculate Conception of the Blessed Virgin Mary, Pope Francis solemnly inaugurated the Jubilee Year of Mercy with the celebration of the Holy Sacrifice of the Mass.

“This Extraordinary Holy Year is itself a gift of grace,” the Pope said in his homily  To pass through the Holy Door means to rediscover the infinite mercy of the Father who welcomes everyone and goes out personally to encounter each of them.”

The full text of Pope Francis’ prepared homily for the Solemnity of the Immaculate Conception and the Inauguration of the Jubilee of Mercy can be found below:

Solemnity of the Immaculate Conception
Inauguration of the Jubilee of Mercy

In a few moments I will have the joy of opening the Holy Door of Mercy. We carry out this act, so simple yet so highly symbolic, in the light of the word of God which we have just heard. That word highlights the primacy of grace. Again and again these readings make us think of the words by which the angel Gabriel told an astonished young girl of the mystery which was about to enfold her: “Hail, full of grace” (Lk 1:28).

The Virgin Mary was called to rejoice above all because of what the Lord accomplished in her. God’s grace enfolded her and made her worthy of becoming the Mother of Christ. When Gabriel entered her home, even the most profound and impenetrable of mysteries became for her a cause for joy, faith and abandonment to the message revealed to her. The fullness of grace can transform the human heart and enable it to do something so great as to change the course of human history.

The feast of the Immaculate Conception expresses the grandeur of God’s love. Not only does he forgive sin, but in Mary he even averts the original sin present in every man and woman who comes into this world. This is the love of God which precedes, anticipates and saves. The beginning of the history of sin in the Garden of Eden yields to a plan of saving love. The words of Genesis reflect our own daily experience: we are constantly tempted to disobedience, a disobedience expressed in wanting to go about our lives without regard for God’s will. This is the enmity which keeps striking at people’s lives, setting them in opposition to God’s plan.  Yet the history of sin can only be understood in the light of God’s love and forgiveness. Were sin the only thing that mattered, we would be the most desperate of creatures. But the promised triumph of Christ’s love enfolds everything in the Father’s mercy. The word of God which we have just heard leaves no doubt about this. The Immaculate Virgin stands before us as a privileged witness of this promise and its fulfilment.

This Extraordinary Holy Year is itself a gift of grace. To pass through the Holy Door means to rediscover the infinite mercy of the Father who welcomes everyone and goes out personally to encounter each of them. This will be a year in which we grow ever more convinced of God’s mercy. How much wrong we do to God and his grace when we speak of sins being punished by his judgment before we speak of their being forgiven by his mercy (cf. Saint Augustine, De Praedestinatione Sanctorum, 12, 24)! But that is the truth. We have to put mercy before judgment, and in any event God’s judgement will always be in the light of his mercy. In passing through the Holy Door, then, may we feel that we ourselves are part of this mystery of love. Let us set aside all fear and dread, for these do not befit men and women who are loved. Instead, let us experience the joy of encountering that grace which transforms all things.

Today, as we pass through the Holy Door, we also want to remember another door, which fifty years ago the Fathers of the Second Vatican Council opened to the world. This anniversary cannot be remembered only for the legacy of the Council’s documents, which testify to a great advance in faith. Before all else, the Council was an encounter. A genuine encounter between the Church and the men and women of our time. An encounter marked by the power of the Spirit, who impelled the Church to emerge from the shoals which for years had kept her self-enclosed so as to set out once again, with enthusiasm, on her missionary journey. It was the resumption of a journey of encountering people where they live: in their cities and homes, in their workplaces. Wherever there are people, the Church is called to reach out to them and to bring the joy of the Gospel. After these decades, we again take up this missionary drive with the same power and enthusiasm. The Jubilee challenges us to this openness, and demands that we not neglect the spirit which emerged from Vatican II, the spirit of the Samaritan, as Blessed Paul VI expressed it at the conclusion of the Council. May our passing through the Holy Door today commit us to making our own the mercy of the Good Samaritan.