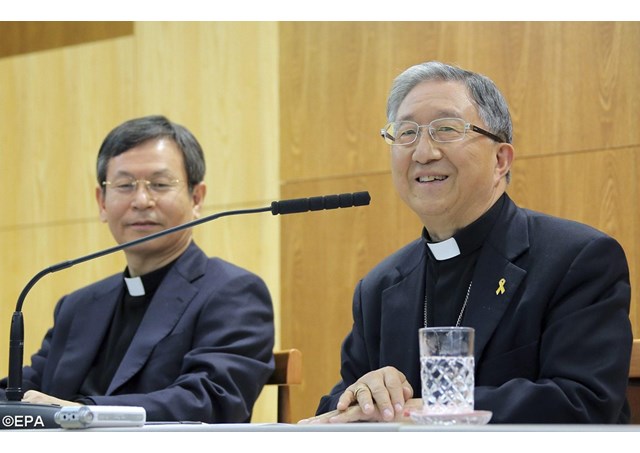 South Korea's Catholic Church announced on Monday it had reached agreement with North Korea to send priests there on "a regular basis," seeking an opening in a country with a long history of tight religious control, AFP reported.  The agreement, which should see priests leading services in Pyongyang on major holy days from next year, followed a visit to the North Korean capital by South Korean bishops last week.  The announcement by the Catholic Bishop's Conference of Korea (CBCK) ‎came at the end of a 4-day visit to North Korea by a delegation of 4 bishops and 13 priests, on the invitation of Pyongyang's state-run Korean Catholic Association (KCA), which has no link with the Vatican.

Although religious freedom is enshrined in the North's constitution, all religious activity is subject to extremely tight restrictions and completely banned outside of state-sanctioned institutions.  There is no resident Catholic priest anywhere in the country and just one Catholic church building in Pyongyang, Changchung Cathedral. But experts say it holds no confessions, baptisms or sacraments.  There are also two Protestant churches, but there are no Catholic priests, ‎Protestant pastors or Buddhist monks in North Korea.‎

CBCK spokesman Lee Young Sik told AFP the first visit was scheduled for Easter in March 2016.  "And then we will iron out details on how frequently they would visit and lead a mass there," Lee said.

‎In the early 20th century, Pyongyang was a regional missionary hub with scores of churches and a thriving Christian community that earned it the title of "Jerusalem of the East".  The KCA claims to have 3 thousand members, but AsiaNews sources ‎estimate that there are less than ‎‎800 and these are mostly the very old people, baptized before the ‎Korean War (which broke out in 1950) ‎who have no way to practice their faith.  In some special ‎occasions like Christmas, it is possible that the ‎faithful meet exchange a greeting of "peace", but nothing ‎more than thatThe North Korean regime allows Catholic organizations to run aid projects in North Korea, but direct relations with the Vatican are non-existent.  When Pope Francis visited South Korea last year, he held a special mass in Seoul dedicated to reunification of the two Koreas.  (Source: AFP/AsiaNews)