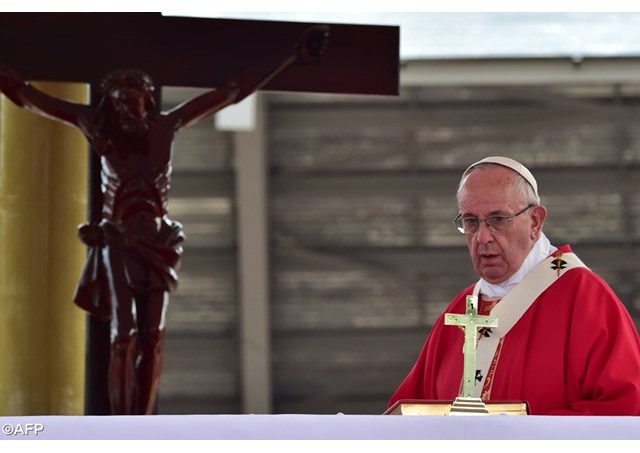 (Vatican Radio) “Today we recall with gratitude the sacrifice of the Ugandan Martyrs, whose witness of love for Christ and His Church has truly gone ‘to the end of the earth’.” Those were the words of Pope Francis as he began his homily during Mass at the Uganda Martyr’s Shrine in Namugongo.

During Liturgy, Pope Francis also remembered the “Anglican martyrs whose deaths for Christ testify to the ecumenism of blood.” The witness of the Ugandan Martyrs, the Pope said, should be an example for us. “We too have received the gift of the Spirit,” the Pope said, which not only makes us “sons and daughters of God,” but also gives us strength “that we may bear witness to Jesus and make Him everywhere known and loved.”

Pope Francis encouraged us to “daily fan into flame the gift of the Spirit who dwells in our hearts” so that we might become the “missionary disciples” Christ calls us to be. This mission, he continued, is directed not only to our families and friends, and those who are close to use, but also to those we do not know, even to those who might be unfriendly or even hostile to us. Missionary discipleship, he said, “also finds expression in our care for the elderly and the poor, the widowed and the orphaned.”

This, the Pope said, “is the legacy which you have received from the Uganda martyrs – lives marked by the power of the Holy Spirit, lives which witness even now to the transforming power of the Gospel of Jesus Christ.” It is a legacy that “is not served by an occasional remembrance, or by being enshrined in a museum like a precious jewel.” Rather, we honour the Saints “when we carry on their witness to Christ, in our homes and neighbourhoods, in our workplaces and civil society, whether we never leave our homes or we go to the farthest corner of the world.”