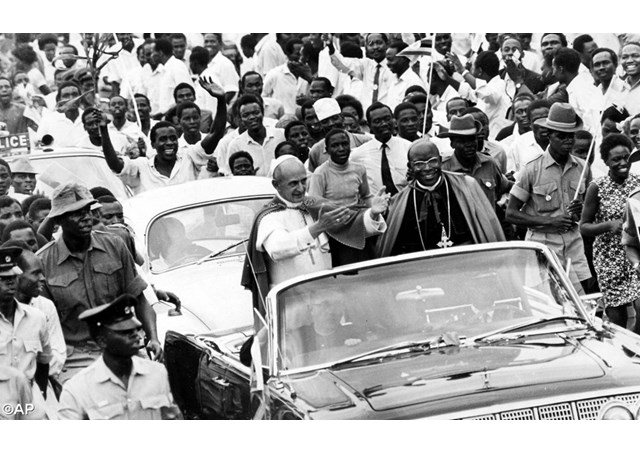 (Vatican Radio) Pope Francis is currently on his Apostolic Journey to Africa, his 11th abroad, which has taken him to Kenya where he touched down on Wednesday 24th of November and will take him to the Central African Republic on the 29th from where he leaves for Rome the next day. As he makes his way west on his first ever visit to this continent he’s scheduled to visit Uganda where he arrives on Friday 27th of November.

Interestingly Uganda was the very first African nation a Roman Pontiff was ever to visit. It was the 31st of July 1969 in the aftermath of the Second Vatican Council and the pope was Blessed Paul VI:“For the first time history”, he said upon his arrival at Entebbe airport, “the Successor of Peter as Vicar of Christ sets foot upon the soil of Africa”...

"Thanks be to God also for the marvels of His grace, Paul VI  added, which are poured out abundantly upon this land as well as for the generous response of Africa to the Gospel message going on to bear witness to the blood of the Martyrs of Uganda. And then this first pilgrim pope spoke in one of the 52 Ugandan languages, Lugandan: “The Lord be with you’, he said. And again ‘Peace is with you and all those who are listening to me”.

On this same day Paul VI  delivered a homily in Kampala during Holy Mass to mark the Eucharistic celebration at the conclusion of the Symposium organised by the Bishops of Africa: “A burning and much discussed question arises concerning your evangelizing work”, he remarked, “and it is that of the adaptation of the Gospel and the Church to African culture. Must the Church be European, Latin, Oriental…or must she be African?”

Answering his own question Pope Paul then highlighted the importance of Africa being above all Catholic. Adding however that it must also be suited to the language, style, character, genius and culture of the people who profess this Faith. “From this point of view”, he remarked,”a certain pluralism is not only legitimate, but desirable. An adaptation of the Christian life in the fields of pastoral, ritual, didactic and spiritual activities is not only possible, it is even favoured by the Church. The liturgical renewal is a living example of this. And in this sense you may, and you must, have an African Christianity.”

Let’s recall how Paul VI was familiar with the culture of Africa having travelled there, though not to Uganda, before his election to the See of Peter when he was still Archbishop of Milan. And he clearly viewed this journey to Uganda as to the entire African continent, an idea expressed on another occasion during this Apostolic journey which lasted till the 2nd of August, and so three days. It was at the beginning of his address to the Parliament of Uganda. “We salute you Africa, all of Africa,” he insisted, “even those regions which are not physically represented here today.”

In this speech to the Ugandan Parliament Paul VI touched on a variety of different issues pointing to the Church’s evangelical principle of non-violence. “We shall be faithful, unto its uttermost consequences, to one programme only - that of “justice and peace” - which is the programme of Christ. No longer should violence be the means of resolving disagreements among men, but reason and love. No longer man against man, but man for man, and with man, in brotherhood.”

Moreover, he focused on the question of colonialism and neo-colonialism across Africa which he described as a burning question highlighting how economic interests had prevailed unilaterally over human considerations.

Pope Paul also went on to condemn racial discrimination applauding what he referred to as “the deep sense of community Africans have”. But he added, this sense of community must be broadened out to the civil national and even the international community.

Let’s recall how the 1960’s were years when many African countries gained independence from the colonial powers. Uganda in 1962 from Britain and the other two countries Pope Francis is visiting followed this same path Kenya from the British in 1963 and the Central African Republic earlier still in 1960 from the French.

Getting back to the visit of Paul VI to Uganda however, there’s one last thing I’d like to mention as we celebrate fifty years since the canonisation of the Catholic Martyrs. It is to recall how during his journey to Uganda as he addressed the dignitaries and representatives of Islam he also highlighted how: “…those confessors of the Moslem faith who were the first to suffer death, in the year 1848, for refusing to transgress the precepts of their religion”.

Paul VI then  expressed the wish, that: “the shining sun of peace and brotherly love rise over the land, bathed with their blood by generous sons of the Catholic, Christian and Moslem communities of Uganda, to illuminate all of Africa!