Preacher of Papal Household speaks to Church of England Synod 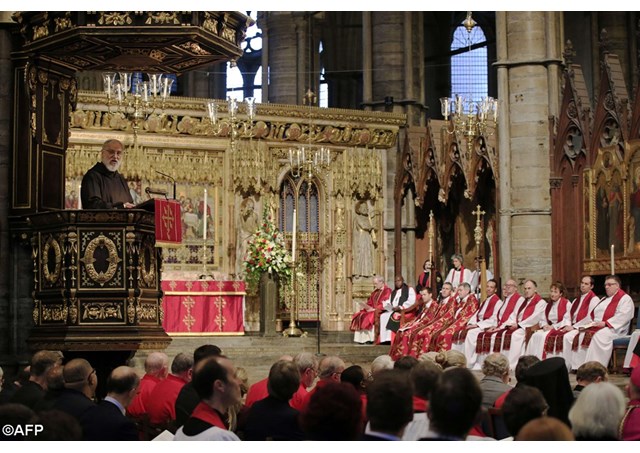 (Vatican Radio) The Preacher of the Papal Household on Tuesday said the upcoming fifth centenary of the Protestant Reformation is an opportunity that should “not be wasted by people remaining prisoners of the past, trying to establish each other’s rights and wrongs,” but should be seen as a chance to “take a qualitative leap forward.”

Father Raniero Cantalamessa, OFMCap., was preaching a sermon in Westminster Abbey during the inauguration of the tenth General Synod of the Church of England, with Queen Elizabeth II in attendance.

He even called for the preaching of one of the basic tenants of Reformers such as Martin Luther and Thomas Cranmer: Justification by faith.

Father Cantalamessa said it should be preached “with more vigour than ever.”

“No in opposition to good works – the issue is already settled - but rather in opposition to the claim of people today that they can save themselves thanks to their science, technology or their man-made spirituality, without the need for a redeemer coming from outside humanity,” he said.

“Unity is not a simple matter,” Father Cantalamessa  said.

“Nothing is more important than to fulfil Christ’s heart desire for unity expressed in today’s gospel,” he continued. “In many parts of the world people are killed and churches burned not because they are Catholic, or Anglican, or Pentecostals, but because they are Christians. In their eyes we are already one! Let us be one also in our eyes and in the eyes of God. “

The full text of Father Cantalamessa’s homily is below

Sermon to the General Synod of the Church of England

Few prophetic oracles in the Old Testament can be dated so precisely as that of Haggai, which we have just heard in the first reading. We can place it between August and December in the year 520 BC. The exiles, after the deportation to Babylon, have come back to rebuild the Temple in Jerusalem. They set to work, but soon grow discouraged, each preferring to work on his own house instead. Into this situation comes the prophet Haggai, sent by God with the message we have heard.

The Word of God, once it is proclaimed, remains forever alive; it transcends situations and centuries, each time casting new light. The situation deplored by the prophet is renewed in history each time we are so absorbed in the problems and interests of our own parish, diocese, community – and even of our particular Christian denomination - that we lose sight of the one house of God, which is the Church.

The prophecy of Haggai begins with a reproof, but ends, as we heard, with an exhortation and a grandiose promise: “Go up into the hills, fetch timber and rebuild the House, and I shall take pleasure in it and manifest my glory there” - says the Lord”.

One circumstance makes this point particularly relevant. The Christian world is preparing to celebrate the fifth centenary of the Protestant Reformation. It is vital for the whole Church that this opportunity is not wasted by people remaining prisoners of the past, trying to establish each other’s rights and wrongs. Rather, let us take a qualitative leap forward, like what happens when the sluice gates of a river or a canal enable ships to continue to navigate at a higher water level.

The situation has dramatically changed since then. We need to start again with the person of Jesus, humbly helping our contemporaries to experience a personal encounter with Him. “All things were created through him and for him”; Christ is the light of the world, the one who gives meaning and hope to every human life – and the majority of people around us live and die as if He had never existed! How can we be unconcerned, and each remain “in the comfort of our own panelled houses”? We should never allow a moral issue like that of sexuality divide us more than love for Jesus Christ unites us.

We need to go back to the time of the Apostles: they faced a pre-Christian world, and we are facing a largely post-Christian world. When Paul wants to summarise the essence of the Christian message in one sentence, he does not say, “I proclaim this or that doctrine to you.” He says, “We preach Christ crucified” (1 Cor 1:23), and “We preach . . . Jesus Christ as Lord” (2 Cor 4:5). This is the real “articulus stantis et cadentis Ecclesiae”, the article by which the Church stands or falls.

This does not mean ignoring the great theological and spiritual enrichment that came from the Reformation or desiring to go back to the time before it. It means instead allowing all of Christianity to benefit from its achievements, once they are freed from certain distortions due to the heated atmosphere of the time and of later controversies.

Justification by faith, for example, ought to be preached by the whole Church—and with more vigour than ever. Not in opposition to good works – the issue is already settled - but rather in opposition to the claim of people today that they can save themselves thanks to their science, technology or their man-made spirituality, without the need for a redeemer coming from outside humanity. Self-justification! I am convinced that if they were alive today this is the way Martin Luther and Thomas Cranmer would preach justification through faith!

Unity is not a simple matter. One has to start with the big Churches, those that are well structured, putting together that which unites them, which is vastly more important than what divides them; not imposing uniformity but aiming at what pope Francis calls “reconciled diversities”. Nothing is more important than to fulfil Christ’s heart desire for unity expressed in today’s gospel. In many parts of the world people are killed and churches burned not because they are Catholic, or Anglican, or Pentecostals, but because they are Christians. In their eyes we are already one! Let us be one also in our eyes and in the eyes of God.

The Anglican Church has a special role in all of this. It has often defined itself as a “via media” (a Middle Way) between Roman Catholicism and Reformed Christianity. From being a “via media” in a static sense, it must now become more and more a via media in a dynamic sense, exercising an active function as a bridge between the Churches. The presence among you of a priest of the Catholic Church, in circumstances of such special significance, is a sign that something of the kind is already happening.

Let us conclude by returning to the text of Haggai. After the people of Israel, in obedience to the prophet’s invitation, had returned with renewed fervour to the task of rebuilding the temple, God sent His prophet again, this time with a message full of hope and consolation:

Zerubbabel was the political leader at the time, and Joshua the religious leader. I believe that the Lord wanted me to be among you today, above all to tell you that He is addressing this same message to you, at the inauguration of your Synod and also in view of the meeting planned for next January between the leaders of the entire Anglican communion: “Take courage, Your Majesty, Sovereign of this nation, courage, Justin, Archbishop of Canterbury, courage Sentamu, Archbishop of York, courage, you bishops, clergy and laity of the Church of England! To work, because I am with you. Says the Lord!”