Pope: widows are image of Church seeking to stay faithful 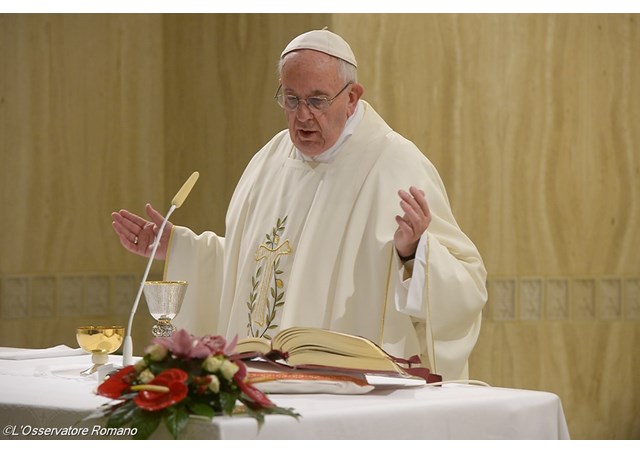 (Vatican Radio) The Church remains faithful if she keeps her eyes fixed on Jesus, but she becomes lukewarm and mediocre if she seeks comfort in worldly things. That was Pope Francis’ message on Monday as he reflected on the Gospel reading at Mass in the Casa Santa Marta…

Pope Francis noted that the reading from St Luke’s Gospel tells the story of the widow who puts her two coins in the temple treasury box, while other wealthy worshippers make a great show of the money they're putting in. Jesus says that “this poor widow put in more than all the rest” because the others were giving away money from their surplus wealth, while she, in her poverty, “has offered her whole livelihood”. In the Bible, Pope Francis said, the widow is the woman who is alone, who has no husband to look after her, who has to manage on her own, who survives on charity. The widow in this Gospel passage, he said, was “a widow who had placed her trust only in the Lord”. I like to look at the widows in the Gospel, he said, as an image of the “widowed” Church who is waiting for Jesus to return.

The Church is the bride of Christ, Pope Francis said, but her Lord has gone and her only treasure is in her Lord. If the Church remains faithful, then she leaves everything while waiting for her Lord to return. If she does not have so much faith in the love of her Lord, then she tries to get by in other ways, seeking security in things that are more of this world than of God.

The widows of the Gospels, the Pope continued, speak beautifully to us about Jesus and His Church. There is the widow of Nain who was crying as she accompanied her son to be buried outside the city gates. There is the widow who goes to the unjust judge in order to defend her sons, knocking on his door every day and bothering him continuously until he delivers a just sentence for her. This is the widowed Church who prays and intercedes for her children, Pope Francis explained. But the heart of the Church is always with Jesus, the Bridegroom in heaven.

According to the desert fathers, the Pope said, our souls also resemble the Church, and the closer our souls, our lives, are to Jesus, the more we are able to avoid worldly, useless things that lead us away from Christ. While the ‘widowed’ Church waits for Jesus, he said, she can be faithful, trusting that her husband will return, or she can be unfaithful to her widowhood, a lukewarm, mediocre, worldly Church seeking comfort in other things.

In these last days of the liturgical year, Pope Francis concluded, we would do well to ask ourselves if our souls are searching for the Lord, or if they’re looking for comfort in things which do not please the Lord. Let our souls say “Come Lord Jesus! Come!” And may we leave behind all those useless things which stop us staying faithful.