Cardinal says Myanmar is on threshold of hope and peace 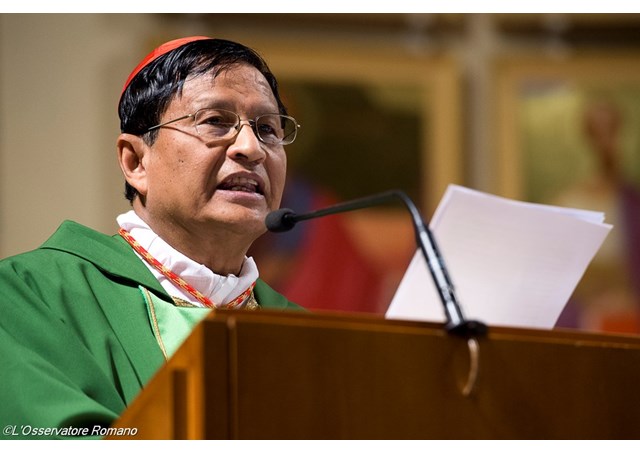 Myanmar’s prominent Catholic Church leader has thanked and congratulated the citizens of his country for their commitment to democracy saying  that while other parts of the world were locked in conflict and bloodshed, Myanmar stood as a beacon of hope of peaceful‎ transition to peace.‎  “Nearly 80% of our people, poor and the rich, the old and young fulfilled their  commitment to  a peaceful  change of leadership.  You my people are today the admiration of the world.  You have led a silent revolution,” Cardinal  Charles Bo, Archbishop of Yangon said in a statement following the complete results of the Nov. 8 elections.

The results of Myanmar’s first openly contested elections since 1990, gave the National League for Democracy (NLD) of Aung San Suu Kyi, an absolute majority of seats in both chambers of the national parliament, enough to ensure that its candidate would become president.  While congratulating the Election Commission for ensuring largely free and fair election, the nation’s first cardinal thanked President  U Thein Sein and the  Army commander ‎for recognition of the election results and showing their commitment to democracy and development of the nation.

Calling the achievement of Suu Kyi as the ‘Mandela” moment of 21st Century, Cardinal Bo compared the democracy leader to stalwarts such as Mahatma Gandhi, Martin Luther King Jr and Nelson Mandela. “In a world torn by war and hatred,” he said, Suu Kyi “remains the sole  symbol of  moral power.”  “Cutting across  all identities, all races and religions people of Myanmar  have chosen her as their leader of hope.  She is   the icon of hope for the millions.” “Myanmar,” he said,  “stands at the threshold of hope.”

Cardinal Bo pointed out that Myanmar has before her the “arduous task of healing”.  He mentioned several challenges facing the nation, such as extreme poverty, war  and displacement, denial of rights to most of the people, rising religious fundamentalism,  decades of  conflict and oppression in  the ethnic areas, millions of migrant youth in neighbouring countries, drug and human trafficking and crony capitalism.  Cardinal Bo pledged the prayers and support of Myanmar’s Catholic Church for Suu Kyi in her party’s task of leading the nation on the part of justice, peace and fellowship of all.‎