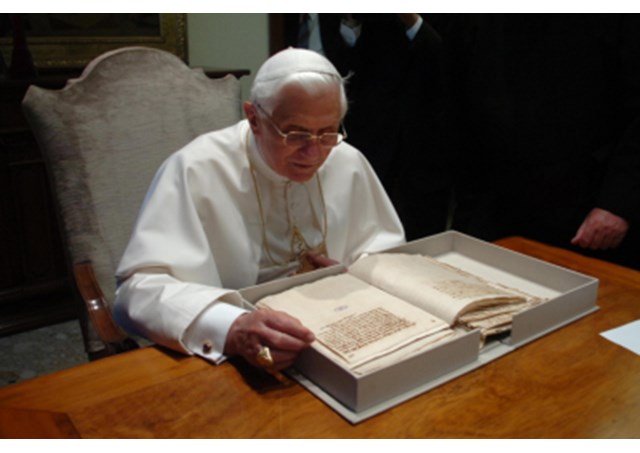 (Vatican Radio) The official inauguration of the Library Biblioteca Romana Joseph Ratzinger – Benedetto XVI – dedicated to the life and the thought of the Pope Emeritus as a scholar and a Pontiff - was held on Wednesday evening at the Pontifical Teutonic College.
Before becoming Pope, Cardinal Joseph Ratzinger celebrated Mass every week at the College, which serves the German-speaking community and is located on the Vatican grounds.
The library is a collection of more than 1000 books in 36 languages provided by Pope emeritus Benedict XVI, by the Libreria Editrice Vaticana, by the Vatican Foundation, and by the Papst Benedikt XVI Institute of Regensburg.
Cardinal Gianfranco Ravasi, the President of the Pontifical Council of Culture, began the evening with an academic lecture at the nearby Augustinian Patristic Institute, entitled “From the Bible to the Library – Benedict XVI and the Culture of the Word of God."
Click below to hear our report
Cardinal Ravasi said even as the pastor of the universal Church, Benedict XVI never stopped being a lover of books.
"The current collection of writings by him and about him attests precisely to his impressive resume as a scholar, theologian, and reader," Cardinal Ravasi said.
He noted the wide breadth of his knowledge, not only of the classics to theology, but also modern authors such as Bernanos, Buber, Camus, Hölderlin, Nietzsche, Sartre and others.
After the lecture, the attendees walked to the new Library, which is expected to be a centre for the study of the theology of Benedict XVI, both before and after he became Pope. The library's goal is to have a copy of all his works, in every language possible, as well as the important volumes about the Pope emeritus and his thought.
The Library Biblioteca Romana Joseph Ratzinger – Benedetto XVI has been supported by the Roman Institute of the Society of Görres and by the Joseph Ratzinger-Benedict XVI Vatican Foundation.