Pope Francis: the Lord weeps for the sins of a world at war 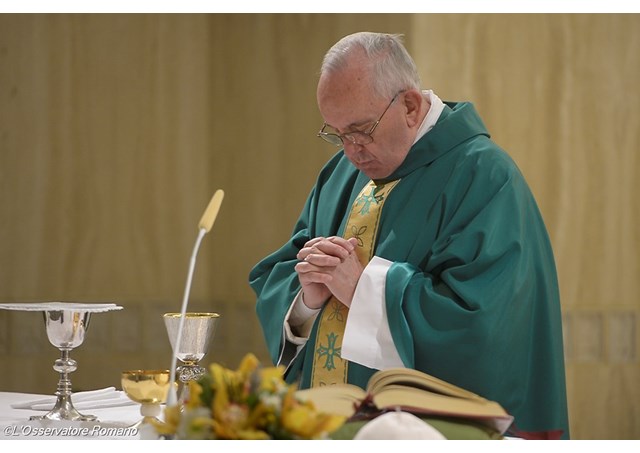 (Vatican Radio) “The whole world is at war,” and the rejection of the “path of peace” means that God Himself, that Jesus Himself, weeps. This was the message of Pope Francis to the faithful following the readings of the day at Mass on Thursday morning in the Casa Santa Marta.

“Jesus wept.” These were the words with which the Holy Father’s remarks following the readings of the day began on Thursday in the chapel of the Santa Marta residence in the Vatican, echoing the words of St. Luke the Evangelist, from whose Gospel the Gospel reading was taken.

Jesus approaches Jerusalem, and seeing the city on a hill from a distance, weeps, and says, “If this day you only knew what makes for peace–but now it is hidden from your eyes.” Pope Francis repeated the words of Our Lord to the Holy City, and then added:

“Today Jesus weeps as well: because we have chosen the way of war, the way of hatred, the way of enmities. We are close to Christmas: there will be lights, there will be parties, bright trees, even Nativity scenes – all decked out – while the world continues to wage war. The world has not understood the way of peace.”

War to line the pockets of the traffickers

Pope Francis went on to recall the recent commemorations of the Second World War, the bombs dropped on Hiroshima and Nagasaki, his visit to Redipuglia last year on the anniversary of the Great War: “Useless slaughters,” he called them, repeating the words of Pope Benedict XV. “Everywhere there is war today, there is hatred,” he said. Then he asked, “What shall remain in the wake of this war, in the midst of which we are living now?”:

“What shall remain? Ruins, thousands of children without education, so many innocent victims: and lots of money in the pockets of arms dealers. Jesus once said: ‘You can not serve two masters:  either God or riches.’ War is the right choice for him, who would serve wealth: 'Let us build weapons, so that the economy will right itself somewhat, and let us go forward in pursuit of our interests. There is an ugly word the Lord spoke: ‘Cursed!’ Because He said: ‘Blessed are the peacemakers!.’ The men who work war, who make war, are cursed, they are criminals. A war can be justified – so to speak – with many, many reasons, but when all the world as it is today, at war – piecemeal though that war may be – a little here, a little there, and everywhere – there is no justification – and God weeps. Jesus weeps.”

The world weeps over its crimes

The Holy Father went on to say that, while the arms dealers go about their business, there are the poor peacemakers who, perforce to help another person, and another and another, spend themselves utterly, and even give their lives – as did Bl. Mother Teresa of Calcutta, against whom the powerful, worldy cynic might say, “But what did she ever accomplish? She wasted her life helping others on their way to death?” He repeated, “We do not understand the way of peace.”:

“It will do us well to ask the grace of tears for ourselves, for this world that does not recognize the path of peace, this world that lives for war, and cynically says not to make it. Let us pray for conversion of heart. Here before the door of this Jubilee of Mercy, let us ask that our joy, our jubilation, be this grace: that the world discover the ability to weep for its crimes, for what the world does with war.”