Catholics, Lutherans must ask forgiveness and work together 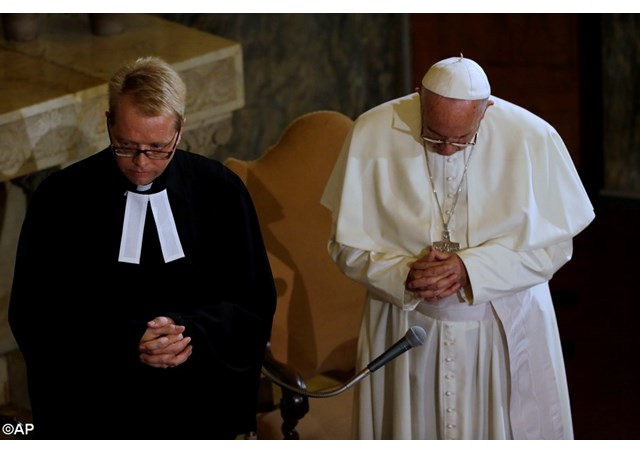 (Vatican Radio) Catholics and Lutherans must ask each other for forgiveness for the scandal of past divisions, as they walk together today in the service of the poor and needy. That was Pope Francis’ message on Sunday as he visited Rome’s Evangelical Lutheran Church for an evening prayer service.

After answering questions from several members of the Lutheran community, the Pope spoke of the way Jesus guides us all with love, urging us to put service of the poor at the heart of our lives and ministries.

Speaking off the cuff, Pope Francis also recalled the persecutions that Catholics and Lutherans carried out against each other in the past, saying that today we must ask for forgiveness and choose instead to serve together, just as Jesus chose to serve us. Let us ask the Lord to help us walk together, the Pope said, not focusing on what divides us, but on the need to reconcile our differences in service of those most in need.

In his written words to the Lutheran community, Pope Francis also spoke about the importance of shared prayers, joint liturgies and other ways in which Christians can worship together. He highlighted the week of prayer for Christian unity in January and the day of prayer for creation on September 1st as two moments during which Catholics and Lutherans can advance on the path of this spiritual ecumenism.

Finally the Pope said it is essential that the Catholic Church continues courageously and honestly to re-evaluate the intentions of the Reformation and of Martin Luther in particular, as he strove for a Church that was continually being reformed (‘Ecclesia semper reformanda’). The recent joint document ‘From Conflict to Communion: Lutheran-Catholic Commemoration of the Reformation in 2017’, he said, has taken up this reflection in a very promising way.

Pope Francis is the third pontiff to visit Rome’s Evangelical Lutheran Church, following on from his predecessors, Benedict XVI in March 2010 and John Paul II in December 1983, marking the 5th centenary of Martin Luther’s birth.