Pope Francis eats with the poor in Florence 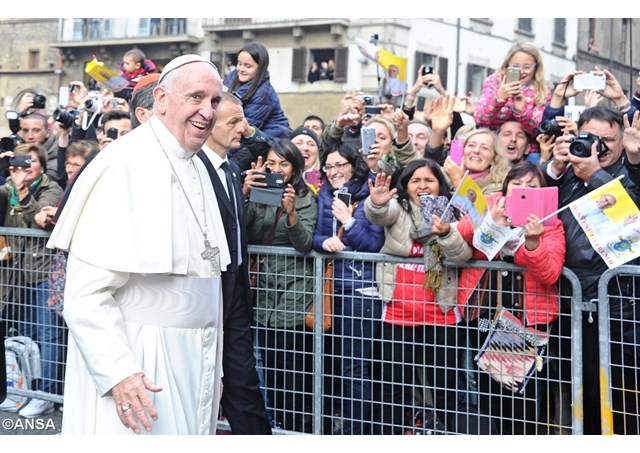 (Vatican Radio)  Pope Francis on his visit to the Italian city of Florence on Tuesday (Nov. 10) sat down for lunch with the city's poor at St. Francis' Soup Kitchen (Mensa di San Francesco Poverino).

In between his meeting with the National Congress of the Italian Church and celebrating Mass in the city’s football stadium, the Pope sat down for lunch with 60 of the city’s poorest citizens, both Italians and of other nationalities.

Many had lost both their jobs and their homes, but thanks to the work of the Catholic Church's charity, Caritas, who runs the meal kitchen where the lunch took place, they had not lost their dignity.

Pope Francis was given a meal voucher when he arrived and ate off a plastic plate, just like the rest of those gathered with him, emphasising his teaching that the Church must be with and accompany the marginalised and those on the peripheries of society.

Before lunch, the Holy Father met briefly with the sick and some persons with disabilities in the Basilica of Annunciation.

After individually greeting those present, Pope Francis recited the Angelus prayer with them before walking over to St. Francis' Soup Kitchen for lunch.