Pope: recent stealing of documents was a crime 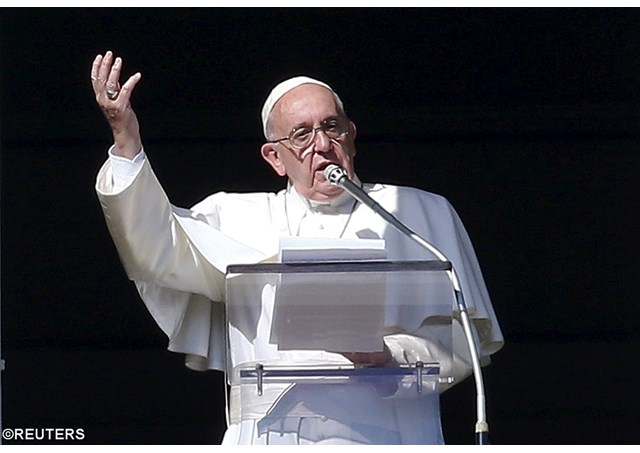 (Vatican Radio) Pope Francis said on Sunday (8th November) that the recent stealing and leaking of the Holy See’s confidential documents was “a crime” and “deplorable act that does not help.” But at the same time he said this “sad event” definitely does not in any way deter him from pressing ahead with his planned reforms of the Roman Curia with the help of his advisers. The Pope’s remarks came at the end of his Sunday Angelus address.

Please find below a translation into English of the Pope's remarks about the leaking of the Holy See's documents:

I know that many of you have been upset by the news circulating in recent days concerning the Holy See’s confidential documents that were taken and published.

For this reason I want to tell you, first of all, that stealing those documents was a crime. It’s a deplorable act that does not help. I personally had asked for that study to be carried out and both I and my advisers were well acquainted with (the contents of) those documents and steps have been taken that have started to bear fruit, some of them even visible.

Therefore I wish to reassure you that this sad event certainly does not deter me from the reform project that we are carrying out, together  with my advisers and with the support of all of you. Yes, with the support of the whole Church because the Church renews itself with prayer and the daily holiness of each baptized person.

I therefore thank you and ask you to continue to pray for the Pope and the Church, without getting upset or troubled but proceeding with faith and hope."

In his earlier address before the recitation of the Angelus Prayer Pope Francis said when faced with the needs of our neighbour we are called to deprive ourselves of something that is indispensable, not something that is left over or surplus to our needs. He used the day’s Gospel reading which describes in the first part how followers of Christian should not behave and in the second part gives an ideal example of how to be a Christian.  In the first part, said the Pope, Jesus criticizes the scribes with their “arrogance, greed and hypocrisy.” Jesus, he continued, noted  how the scribes liked to be greeted respectfully in the squares, take  the front row in the synagogue, the places of honour at banquets and who for show offer long prayers. But at the same time as the scribes paraded in public, Jesus said they were devouring the property of widows.

Pope Francis went on to warn that even nowadays there is a risk of Christians behaving in this way. For example, he said, we must not separate praying from practicing justice because we cannot pray to God and cause harm to the poor. Or when people say they love God but instead their own conceit and profit takes precedence over Him.

Turning to the second part of the Gospel reading, the Pope pointed to the poverty-stricken widow who put into the treasury her two small coins. He recalled that Jesus pointed out to his disciples that this widow gave more than all the others because the rich people donated money they could spare but she put in all that she had to live on.

Pope Francis said this illustrates that we should judge not the quantity but the fullness of the gift, saying it’s not a question of one’s wallet but of one’s hearts and especially the need to love God with all one’s heart and place our trust in Him and His providence. When faced with the needs of our neighbour, he went on, we are called to deprive ourselves of something indispensable, not of something that we can spare or that is left over. We are called to give immediately of our talents without reserves and not after having used them for our personal goals or those of our group.

In the final part of his address, Pope Francis spoke about the Day of Thanksgiving which was being celebrated in Italy on Sunday (8th November) and expressed his closeness to the agricultural sector. I encourage you, he said, to cultivate our earth in such a way as to preserve its fertility so that it can produce food for everybody, nowadays and for future generations. The Pope also reminded his audience that he will be travelling to the Italian cities of Florence and Prato on Tuesday (10th November) during which he will attend the National Ecclesial Congress.