Pope Francis: I want a world without poverty 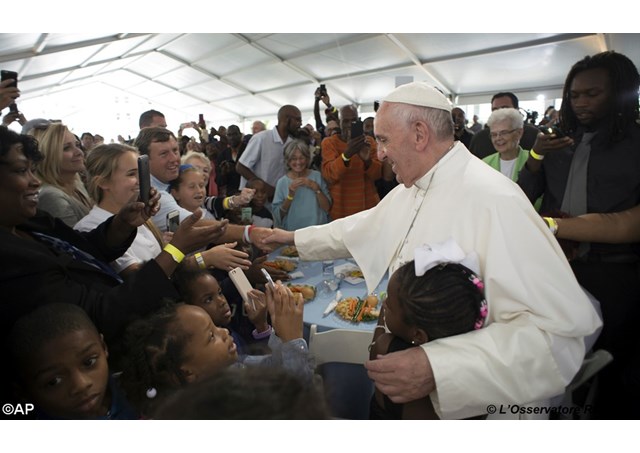 (Vatican Radio) Pope Francis granted an interview to the Dutch paper, Straatnieuws, published by the homeless of the city of Utrecht. In the broad-ranging conversation, Pope Francis touches on topics of interest both personal and ecclesiastical: from his childhood in Argentina, including his boyhood dream of becoming a butcher, to his solicitude for the poor, and his appreciation of his reputation (“Right now,” he tells himself, “you have an important job, but in ten years or so, no one will recognize you.”).

Below, please find some of the highlights.

The interview began with the Pope’s memories of his childhood home in Buenos Aires, “the street in which he grew up.” He recalled playing soccer as a child, and spoke about how everything in his neighbourhood was within walking distance.

His memories of neighbours in Buenos Aires were the source of his personal commitment to the poor. Asked about the Church’s response to poverty, Pope Francis said, “Jesus came into the world homeless and was poor. Then the Church wants to embrace everyone, and say that everyone has a right to have a roof ‘over you’. In the popular movements they are working with three Spanish ‘t’s: trabajo (work), techo (house), and tierra (land). The Church preaches that every person has a right to these three t’s.”

The Holy Father also spoke about the necessity of resisting “two temptations” the Church faces as she tries to speak for the poor without being exploited by different political camps. “The Church must speak with the truth and also with testimony: the testimony of the poor. If a believer speaks about poverty or about the homeless, and leads the life of a pharaoh: this can’t be done.”

Pope Francis said he wants a world without poverty: “We must continue to struggle for this.” But, he said, “I am a believer and I know that sin is always within us. And there is always human greed, the lack of solidarity, selfishness, which create poverty. For this reason, it seems to me a little difficult to imagine a world without poverty. . . . But we must always struggle, always, always.”