Pope: Church is called to serve, not to be served 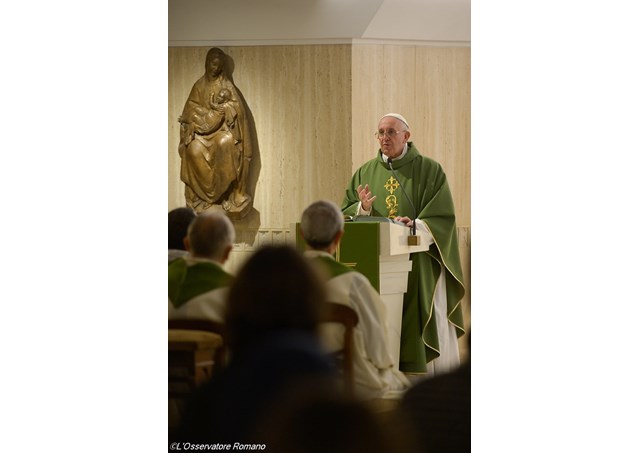 (Vatican Radio) In his homily during Mass on Friday morning, Pope Francis said the Church is called to serve, not to be concerned solely with business affairs; and that Bishops and priests must overcome the temptation to live a “double life.” He warned, too, about “climbers,” those who are attached to money.

Pope Francis developed his homily based on two images of servants presented in the readings from the day’s liturgy. First, he presented the figure of Saint Paul “who gave himself completely to service, always” such that he ended up in Rome betrayed by those who were close to him, and “condemned.” Where did this greatness of the Apostles come from? the Pope asked. It came from Jesus Christ, and Saint Paul “boasts of serving Him, of being chosen, of having the strength of the Holy Spirit.”

The Christian is called to serve, not to be served

He was the servant who served, the Pope said, “he ministered, laying the foundation, that is, announcing Jesus Christ” and “he never stopped to take advantage of his position, of his authority, of being served. He was a minister, a servant in order to serve, not to be served.”

“I tell you how much joy I have,” Pope Francis said, “what moves me, when in this Mass some priests come up and greet me: ‘O Father, I have come here to find my own people, because for forty years I have been a missionary in the Amazon.’ Or a sister who says, ‘No, I have worked for thirty years in a hospital in Africa.’ Or when I find a little sister who for thirty, forty years is working in the department of the hospital with the disabled, always smiling. This is called ‘serving,’ this is the joy of the Church: going out to others, always; going out to others and giving life. This is what Paul did: serving.”

“No to climbers, attached to money, in the Church”

In the Gospel, the Pope said, the Lord shows us the image of another servant, “who instead of serving others is served by them.” He continued, “We have read what this servant did, how he acted with shrewdness, in order to remain in his position.”

“In the Church, too, there are these kinds of people, who instead of serving, of thinking of others, of laying the foundations, are served by the Church: ‘climbers,’ those who are attached to money. And how many priests and Bishops like this have we seen? It’s sad to speak of it, isn’t it? The radical character of the Gospel, of the call of Jesus Christ: to serve, to be at the service [of others], of not stopping for oneself, going out to others always, being forgetful of oneself. And the comfort of the state: I have reached a certain state and I live comfortably, without integrity, like those Pharisees Jesus spoke about, who go out into the public square to be seen by others.”

A Church that does not serves becomes a business-like Church

The Pope described “two images of Christians, two images of priests, two images of sisters.” And Jesus, he said, “makes us see this model in Paul, this Church that never stops” that “always goes forward and shows us the path.”

“Instead, when the Church is tepid, closed in on itself, businesslike, it cannot be said to be a Church that serves, that is at the service [of others], but rather [it must be said] that it is using others. May the Lord give us the grace He gave to Paul, that point of pride of always going forward, always, renouncing, time and again, its own comfort; and may He save us from temptations, from those temptations which at their base are temptations to a double life: I see myself as a minister, that is, as one who serves, but at the base I am served by others.”