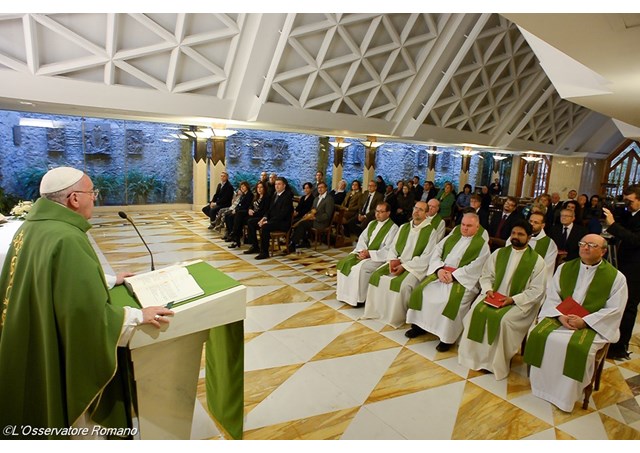 (Vatican Radio) The Christian includes, he does not close the door to anyone, even if this provokes resistance. He who excludes, because he believes himself to be better, generates conflicts and divisions, and does not consider the fact that “we shall all stand before the judgment seat of God.” That was the message of Pope Francis during Thursday morning’s Mass at Casa Santa Marta.

The attitude of Christ is to include

In the Letter to the Romans, Saint Paul exhorts us not to judge and not to despise our brothers, because, the Pope said, this leads to excluding them from “our little group,” to being selective, and this is not Christian.” Christ, in fact, “with His sacrifice on Calvary” unites and includes “all men in salvation.” In the Gospel, publicans and sinners draw near to Jesus – “that is, the excluded, all those that were outside,” – and “the Pharisees and the scribes complained”:

“The attitude of the Scribes and the Pharisees is the same, they exclude. [They say,] ‘We are the perfect, we follow the law. These people are sinners, they are publicans’; and the attitude of Jesus is to include. There are two paths in life: the path exclusion of persons from our community and the path of inclusion. The first can be little but is the root of all wars: all calamities, all wars, begin with an exclusion. One is excluded from the international community, but also from families, from friends – How many fights there are! – and the path that makes us see Jesus and teaches us Jesus is quite another, it is contrary to the other: to include.”

There is resistance in the face of inclusion

“It is not easy to include the people,” Pope Francis said, “because there is resistance, there is that selective attitude.” For this reason, Jesus tells two parables: the parable of the lost sheep, and the parable of the woman and the lost coin. Both the shepherd and the woman will do anything to find what they have lost, and when they find it, they are full of joy:

“They are full of joy because they have found what was lost and they go to their neighbours, their friends, because they are so happy: ‘I found, I included.’ This is the ‘including’ of God, against the exclusion of those who judge, who drive away people, persons: ‘No, no to this, no to that, no to that…’; and a little of circle of friends is created, which is their environment. It is a dialectic between exclusion and inclusion. God has included us all in salvation, all! This is the beginning. We with our weaknesses, with our sins, with our envy, jealousies, we all have this attitude of excluding which – as I said – can end in wars.”

If I exclude, I will one day stand before the tribunal of God

Jesus, the Pope said, acts like His Father, Who sent Him to save us; “He seeks to include us,” “to be a family.”

“We think a little bit, and at least – at least! – we do our little part, we never judge: ‘But this one has acted in this way…’ But God knows: it is his life, but I don’t exclude him from my heart, from my prayer, from my greeting, from my smile, and if the occasion arises I say a good word to him. Never excluding, we have no right! And how Paul finishes the Letter: ‘We shall all stand before the judgment seat of God . . .  then each of us shall give an account of himself to God.’ If I exclude I will one day stand before the judgment seat of God, I will have to give an account of myself to God. Let us ask the grace of being men and women who always include, always, always! in the measure of healthy prudence, but always. Not closing the doors to anyone, always with an open heart: ‘It pleases me, it displeases me,’ but the heart is open. May the Lord grant us this grace.”