Handing on legacy of 'Gaudium et Spes' to young generations 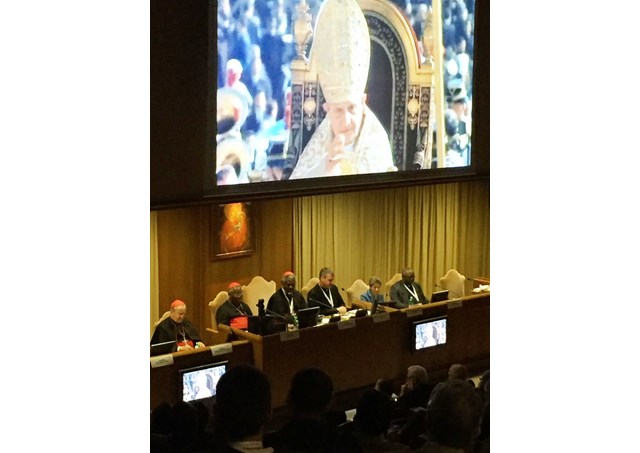 (Vatican Radio) ‘Young generations in the service of mankind’ is the central theme of a two day symposium taking place in Rome this week, organised by the Pontifical Justice and Peace Council to mark the 50th anniversary of the Second Vatican Council’s 'Pastoral Constitution on the Church in the Modern World'. Better known by its Latin name, 'Gaudium et Spes', meaning Joy and Hope, it was one of the last documents produced by the Council and promulgated on the final day, December 7th 1965.

Among those taking part in the opening session of the symposium in the Vatican Synod Hall on Thursday were young justice and peace workers from around the globe, together with several elderly cardinals and lay people who had taken part in the Second Vatican Council. They included the former prefect of the Congregation for Divine Worship and former president of the Pontifical Council for Interreligious Dialogue, Nigerian Cardinal Francis Arinze who spoke to Philippa Hitchen about the importance of 'Gaudium et Spes' today and about the surprising novelty it represented half a century ago…

Cardinal Arinze highlights the far-reaching trajectory of 'Gaudium et spes', pointing out that “It was breaking new ground… and [offered] a panorama on the world of today and tomorrow”. “Situations don’t stand still”, he adds.

Noting that he was the youngest bishop at the final session of the Council, Cardinal Arinze says “the Church is ever young” and 50 years is not all that long a period in which to evaluate the enduring legacy of its documents. In response to those who raise the possibility of Vatican III, Cardinal Arinze reminds us that “we haven’t digested Vatican II”.

Cardinal Arinze summarises the message of Gaudium et spes for the younger generations of today, explaining how “God gave us Earth… our presence is not a joke, it is not a play…our religion is one piece with our daily life… the lay person takes on a distinctive role and makes this world a better place in which to live”.

Introducing the work of the symposium on Thursday morning, ahead of a Mass in St Peter’s Basilica, was the head of Missio, the Pontifical Mission Societies in the United States, Oblate Fr Andrew Small….

Fr Andrew speaks of the creativity and flexibility of Gaudium et spes, adding it was the Church’s way of “catching up with other global institutions”, in order to make the Christian message more relevant. Bearing in mind the post-Second World War context of the document, he says its content “had been bubbling away for years”.

The novelty of the document, he says, lies in the fact that ordinary voices, including people from the poorest parts of the southern hemisphere, were heard and welcomed at the Council. He also mentions in particular the voices of German participants during the process of drawing up the document, including that of Cardinal Ratzinger, now known as Emeritus Pope Benedict XVI.

Fr Andrew talks about Pope Francis’ approach, taking up the legacy of 'Gaudium et Spes', as he encourages young people to “make a noise, be prepared make a mess”, urging them not to be passive, but to engage in the future. The director of Missio concludes by reflecting on the work that his organisation continues today in bringing people of different backgrounds together today, via digital and other platforms, in service to the Church throughout the world.