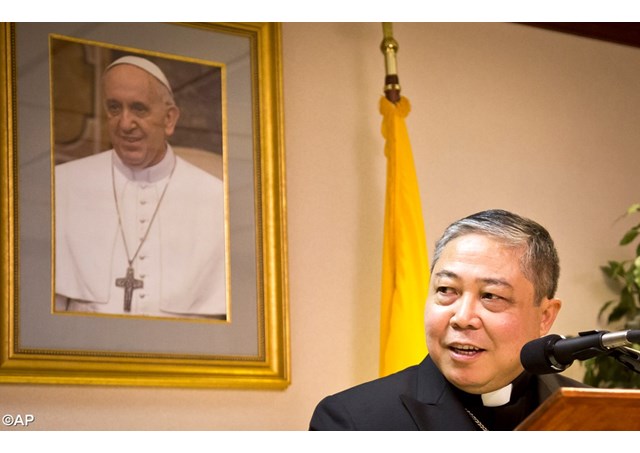 (Vatican Radio) The Holy See Delegation to the United Nations on Monday pointed out progress made in reducing hunger around the world remains “uneven.”

He was speaking at a UN General Assembly meeting on agriculture development, food security and nutrition.

“There are marked differences across regions in reducing hunger, with a high proportion of  the  world’s  hungry  living  in  South  Asian  and  sub-Saharan  African  countries,” Archbishop Auza said.

“Populations in war-torn regions, especially mothers and children, are acutely vulnerable to  hunger  and  food  shortages,” he said.

The full text of Archbishop Auza’s remarks are below

Second Committee of the 70thSession of the General Assembly

My  delegation  wishes  to  thank  the  Secretary  General  for  his  Report  on  Agricultural Development, Food Security and Nutrition (A/70/33), which provides a timely update on progress being made on ending hunger and eliminating malnutrition for all, in view of the call of the 2nd Sustainable Development Goal (SDG) to "end hunger, achieve food security and improved nutrition and promote sustainable agriculture."

As the Millennium Development Goals (MDGs) expire, it is important to evaluate the implementation  and  achievement  of  MDG  1  Target  2,  which  summoned  the  world community to work to “halve, between 1990 and 2015, the proportion of people who suffer from hunger.” This evaluation is key for us to know where we stand, as we start to implement Sustainable Development Goal (SDG) 2 Target 1 to “end hunger” by 2030 “and  ensure  access  by  all  people,  in  particular  the  poor  and  people  in  vulnerable situations, including infants, to safe, nutritious and sufficient food all year round.”  In a word, now is the appropriate time to take stock of the situation, assess what progress has been  made, identify where the greatest needs  are and determine where progress needs to be consolidated to avoid setbacks.

We are encouraged by the fact that since 1990 over 215 million persons have been lifted out of hunger, undernourishment has been reduced almost by half, and over 55% of the 129 developing countries reached the MDG target of cutting in half the prevalence of undernourishment. We are encouraged further by the recent global poverty  forecasts, which indicate that the number of people living in extreme poverty is expected to fall, for the first time, below 10% of the global population before the end of 2015.

However, as the Secretary General’s Report notes, progress made in reducing hunger remains “highly uneven.” Almost 800 million people continue to suffer chronic hunger. There are marked differences across regions in reducing hunger, with a high proportion of  the  world’s  hungry  living  in  South  Asian  and  sub-Saharan  African  countries. Populations in war-torn regions, especially mothers and children, are acutely vulnerable to  hunger  and  food  shortages.  Achieving  SDG  2  can  only  happen  in  the  context  of peaceful  societies.  In  fact,  the  evaluations  on  the  MDGs  clearly  demonstrate  that countries in conflict have lagged far behind in the realization of the MDGs; indeed, many have suffered regressions.

While these findings provide a measure of the magnitude of the task that still lies ahead, they also tell us where to concentrate our efforts  in order to help achieve SDG 2 Target 1 by 2030.

Pope Francis, who has repeatedly expressed his concern over the prevalence of hunger, reminds us of the “paradox of plenty”  in a world “in which there is food for everyone, but not everyone can eat, while waste, excessive consumption and the use of food for other purposes is visible before our very eyes.” One third of the global production of food is not available because of difficulties in its distribution and conservation in many parts of the world, because of our wastefulness and even because of “policies for market stabilization” that demand the deliberate destruction of food. Were this loss prevented or reduced, the number of hungry people in the world would be drastically reduced.

We cannot forget that hunger, like all forms of poverty, is exacerbated by exclusion. We can  eliminate  hunger  and  food  insecurity  and  foster  human  dignity  by  promoting inclusion  and  solidarity.  The  individual  who  lacks  daily  nourishment  is  reduced  to fighting just for survival, without prospects and projects for the future.

In order to raise our ethical awareness against wastefulness and greed, Pope Francis insists that the waste of food is a fruit of the “throwaway culture” and a sad sign of a “globalization of indifference”  that anesthetizes us slowly from feeling the sufferings of others. The challenge to defeat hunger and malnutrition does not have just an economic or scientific dimension, but also and above all an ethical and anthropological dimension. Thus, raising our ethical awareness is key to beating this challenge.

The celebration of  the 2014 International Year of Family Farming allowed us to focus our gaze on the fundamental role of the family as a driver of development. There are more  than  500  million  family  farms  in  the  world,  mostly  belonging  to  peasants, indigenous peoples, traditional communities, pastoralists and other rural groups . They remain an important part of the solution for a world free from poverty and hunger. The family is also the place where we first receive education in solidarity and in a way of life that makes us overcome the “throwaway culture” and the “globalization of indifference.”