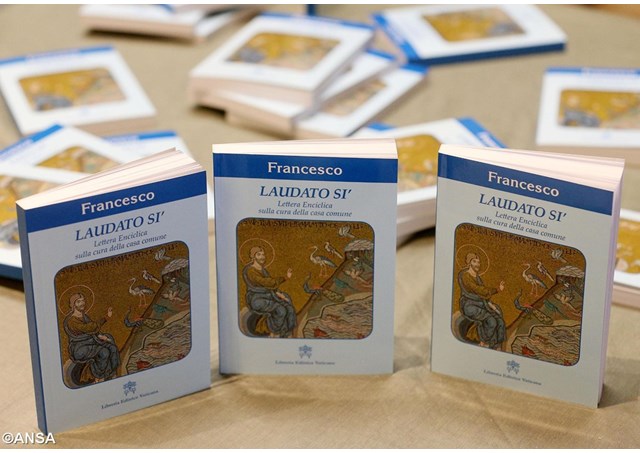 (Vatican Radio) Bishops from around the world have appealed to the COP 21 meeting in Paris to create a “fair, legally binding, and truly transformational” climate agreement.

The bishops are the presidents of several regional episcopal bodies representing every continent on earth, and presented their appeal on Monday in the Holy See Press Office.

The Paris meeting taking place from 7- 8 December will bring together leaders from governments, business and finance, the United Nations, NGOs, and other members of civil society to help create an agreement to protect the environment.

Citing Pope Francis’ encyclical letter, Laudato si’, the bishops reaffirm “the natural environment is a collective good, the patrimony of all humanity and the responsibility of everyone.”

The full text of the appeal is below.

The following appeal is issued by Cardinals, Patriarchs and Bishops from across the globe representing the continental groupings of national episcopal conferences. It is addressed to those negotiating the COP 21 in Paris and it calls on them to work toward the approval of a fair, legally binding and truly transformational climate agreement.

Representing the Catholic Church from the five continents, we Cardinals, Patriarchs and Bishops have come together to express, on our own behalf and on behalf of the people for whom we care, the widely-held hope that a just and legally binding climate agreement will emerge from the negotiations of the COP 21 in Paris. We advance a ten-point policy proposal, drawing on the concrete experience of people across the continents, and linking climate change to social injustice and the social exclusion of the poorest and most vulnerable of our citizens.

In his encyclical letter, Laudato si’ (LS), addressed ‘to every person living on this planet’ (LS 3), Pope Francis claims that ‘climate change represents one of the principal challenges facing humanity today’ (LS 25). The climate is a common good, belonging to all and meant for all (LS 23). The natural environment is a collective good, the patrimony of all humanity and the responsibility of everyone (LS 95).

Whether believers or not, we are agreed today that the earth is essentially a shared inheritance, whose fruits are meant to benefit everyone. For believers, this becomes a question of fidelity to the Creator, since God created the world for everyone. Hence every ecological approach needs to incorporate a social perspective which takes into account the fundamental rights of the poor and the underprivileged (LS 93).

Damage to climate and environment has enormous repercussions. The problem arising from the dramatic acceleration of climatic change is global in its effects. It challenges us to re- define our notions of growth and progress. It poses a lifestyle question. It is imperative that we find a solution that is consensual, because of the scale and global nature of the climate’s impact, it invites a solidarity that is universal, a solidarity that is ‘intergenerational’ and ‘intragenerational’. (LS 13, 14, 162)

The Pope defines our world as ‘our common home’ and, in the exercise of our stewardship, we must keep in mind the human and social degradation which is a consequence of a damaged environment. We call for an integral ecological approach, we call for social justice to be placed centre stage ‘so as to hear both the cry of the earth and the cry of the poor’ (LS 49).

Sustainable development must include the poor

While deploring the dramatic impact of rapid climate change on sea levels, extreme weather events, deteriorating ecosystems and the loss of biodiversity, the Church is also witness to how climate change is affecting vulnerable communities and peoples, greatly to their disadvantage. Pope Francis draws our attention to the irreparable impact of unrestrained climate change in many developing countries across the world. Moreover, in his address to the United Nations the Pope said the misuse and destruction of the environment are also accompanied by a relentless process of exclusion.1

The building and maintenance of a sustainable common home requires courageous and imaginative political leadership. Legal frameworks are required which clearly establish boundaries and ensure the protection of the ecosystem (LS 53).

Reliable scientific evidence suggests that accelerated climate change is the result of unrestrained human activity, working to a particular model of progress and development, and that excessive reliance on fossil fuels is primarily responsible. The Pope and Catholic Bishops from five continents, sensitive to the damage caused, appeal for a drastic reduction in the emission of carbon dioxide and other toxic gases.

We join the Holy Father in pleading for a major break-through in Paris, for a comprehensive and transformational agreement supported by all based on principles of solidarity, justice and participation.2 This agreement must put the common good ahead of national interests. It is essential too that the negotiations result in an enforceable agreement that protects our common home and all its inhabitants.

We, Cardinals, Patriarchs and Bishops, issue a general call and make ten specific policy proposals. We call on COP 21 to forge an international agreement to limit a global temperature increase to within those parameters currently suggested from within the global scientific community to avoid catastrophic climatic impacts, especially on the poorest and most vulnerable communities. There is, we agree, a common but also differentiated responsibility of all nations. Different countries have reached a different stage on the development spectrum. The need to work together in a common endeavour is imperative.

All this would call for serious ecological awareness and education (LS 202-215).

Prayer for the Earth

God of love, teach us to care for this world our common home. Inspire government leaders as they gather in Paris:

to listen to and heed the cry of the earth and the cry of the poor;
to be united in heart and mind in responding courageously;
to seek the common good and protect the beautiful earthly garden you have created for us, for all our brothers and sisters, for all generations to come.

2 Address of the His Holiness Pope Francis to the Environment Ministers of the European Union, Vatican City, 16 September 2015.

BISHOP SIGNATORIES TO THIS DECLARATION:

Written in collaboration with our Catholic networks CIDSE and Caritas Internationalis and with the sponsorship of the Pontifical Council for Justice and Peace.