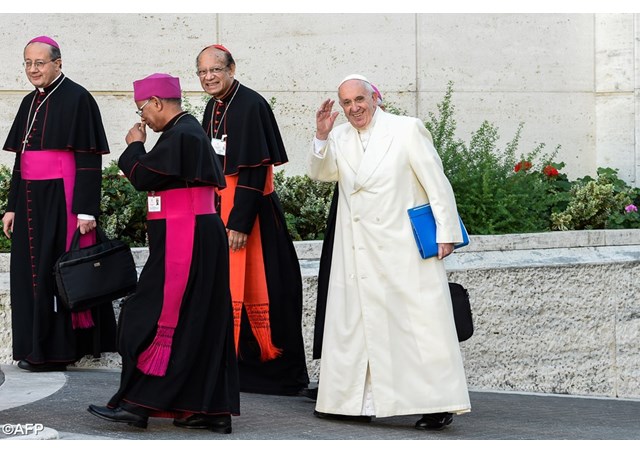 (Vatican Radio)  Saturday October 24. "It is not black and white," Cardinal Christoph Schoborn said on Saturday at the last of the daily briefings of the Synod on the Family.

Also present with him at the briefing were Brazilian Cardinal, Raymundo Damasceno, and the Prior General of the Little Brothers of Jesus, Hervé Janson, - the only lay delegate at the Synod with the right to vote.

Listen to the report by Fr. Russell Pollitt, SJ:

Director of the Holy See Press Office, Fr. Federico Lombardi, SJ, told the media that on Saturday morning they had a definitive text in the plenary which was unanimously approved of by the drafting committee. He said that the working document of the Synod, Instrumentum Laboris, had 174 points; the final document has 94 points.

Cardinal Damasceno said that the most striking thing about this Synod was the methodology. Delegates were given much more time in small groups and he said this allowed for greater participation by all. He said that the Synod was not a parliament but a search for what God wants in relation to the family.

Cardinal Schonborn said that the new methodology was the strength of this Synod and that it was also "true progress in 50 years" since the institution of the Synod of Bishops. He said that the final text was a fruit of of consensus. The Austrian added, "Synodality means respecting differences."

Brother Janson said that the Church was synonymous with the Synod as the ministers of the Church and the Pope are at the service of the people of God. He said that it is the vocation of the Church to live on the periphery, walking side by side with families in difficulty.

On the issue of the admission of the divorced and re-married to the sacraments, Schonborn said that it was given "great attention" but that the key word was "discernment." He said that cases are different and so "there is no black and white". He went on to say that the issue was addressed obliquely in the final text and that criteria for discernment had been offered.

Schonborn said that some may be disappointed as the issue of homosexuality had been addressed but only in the context of how to live out the situation within Christian families where there is a gay member. He said that this would continue to be discussed especially in contexts where it was an important issue. He said the Catechism of the Catholic Church was clear, all people needed to be respected.

Damasceno said that the Church wanted to be close to families who are in extreme poverty, children who live on the streets and those who are divorced. He said that the theme of mercy runs through the entire document. "The Church's concern is to include all people into its ecclesial community," he added.

Janson was asked why he - a non-bishop, non-cleric, lay brother - was given a vote where no women religious had a vote. He replied saying that he did not know. He had considered giving his vote to a woman religious but, in the end, had not done so. He said that it had been a very enriching experience to partake in the Synod and that, above all, it had been an authentic journey because of the small group work.

Schonborn was asked if he did not think that Catholicism was at risk if things were "decentralised" to local episcopal conferences. The issue of decentralisation had been discussed many times during the Synod. He said that the Church had been doing this for a long time and that there needs to be a balance between centralisation and decentralisation.

Towards the end of the briefing Schonborn told the media that the text addressed the responsibility of governments in relation to families. He said that it also mentioned situations in emerging countries where politics and economics were opposed to family life. He mentioned that, at times, the precariousness of work made it difficult to build families and caused disruption to family life.

Fr. Lombardi said that the final text should be available sometime after 6pm Rome time on Saturday.