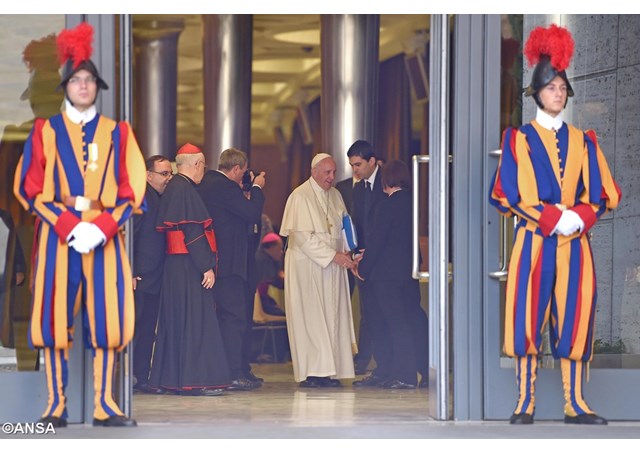 (Vatican Radio) Thursday 22 Oct. The Church's youngest Cardinal, Soane Mafi, was a guest at the daily press briefing for the Synod on the Family. He was joined by Cardinal Oswald Gracias from India (who is on the Synod’s drafting committee) and Archbishop José H.Gómez from the United States of America.

Cardinal Gracias told the briefing that a way forward – for the divorced and civilly re-married – needs to be further explored and could be referred to in the final document which is going to be presented to the Holy Father on Saturday.

Click below to listen to a report by Fr. Russell Pollitt SJ

At the beginning of the briefing Holy See Press Spokesman, Fr. Federico Lombardi, SJ, was again asked about the health of the Holy Father. He assured the media that the Pope is in good health. The three prelates affirmed this.

Cardinal Soane told the media that this was the first Synod he had attended and that it was “exciting.” He said that he is apprehensive as he awaits the outcome. Soane told the briefing that although Oceania is a small isolated island, families there are also affected by global problems. He said that the extended family was important but that many young people were leaving the island looking for a better life. He spoke of the challenges of individualism and materialism.

Archbishop Gómez said that the Synod was wonderful and that it was an experience of listening, learning and talking about the reality of people’s lives. He said that it was important that the Church challenged families to really live their mission of family and for other families.

Gómez lamented that there was not enough time to discuss some issues; he referred specifically to migration and the world’s economic crisis. He said that it was essential that the Church helped people to reach their potential in all aspects of their lives.

Cardinal Gracias was asked many questions about the final document and process. He said that the drafting committee had voted unanimously to accept the first draft that will be presented to the bishops on Thursday afternoon. He said that the bishops would be addressed on the procedural aspects of the next few days by the General Secretary, Cardinal Lorenzo Baldisseri. After this the General Relator, Cardinal Peter Erdo, will relate the important parts of the draft. The bishops will be given a copy of the text to go and study overnight.

The plenary will resume Friday morning for any comments on the draft. The necessary changes will then be made and, on Saturday, the bishops will meet to hear the final draft and vote on the document paragraph by paragraph. There will also be a vote on the document as a whole. Thereafter the document will be presented to Pope Francis. Gracias reminded the media that this document is intended for the Pope, to help and advise him. It is not being written for the world.

Gracias was asked for his thoughts on “healthy decentralisation.” He said that the Church is one universal body but this also means that there are diverse circumstances in this body. He said that the Church had to deal concretely with situations. It would therefore be appropriate for Episcopal Conference’s to study behaviours which occur in their context, he thought. He used polygamy as an example. He said that this was not an issue in India but was in Africa so it would be fitting for the African Church to investigate this. He added that bishops would need to have the right training and assistance theologically and canonically.

The Cardinal was asked about Familiaris Consortio #84 (the document from the 1980 Synod on the Family). In this document St. John Paul II said that the divorced and civilly re-married could not be admitted to the Eucharist. He was asked if the drafting committee would raise this issue in the final document because it had been spoken of often at this Synod. Gracias said that a number of issues were similar but that circumstances have changed. He pointed out that in Familiaris Consortio it also stated that cases should be looked at carefully. He said that St. John Paul II, in that paragraph, stated that we must not put everyone in the same category. The Cardinal said that we cannot treat all people in the same manner. The one who broke up a marital bond is different to another who did not want that to happen and tried by all means to keep it. Gracias said, “to be honest, we don’t have a solution.” He said that there needs to be a study of scripture, moral theology, doctrine, tradition and, hopefully, as understanding is deepened, so too will a way forward emerge.

Cardinal Gracias added that there are divergent views but it is important that a key text is produced which can offer pastoral direction at this time.