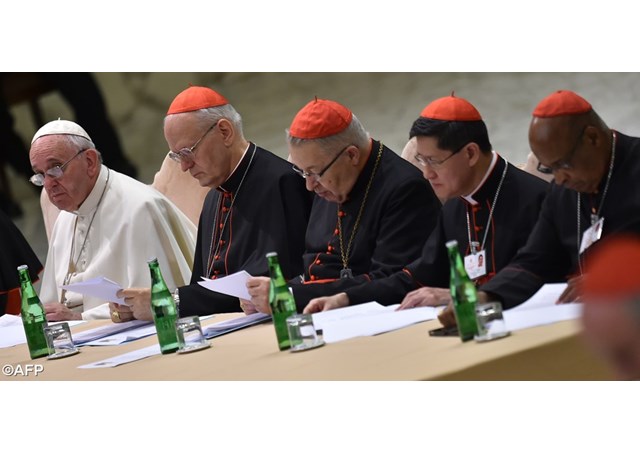 (Vatican Radio) Tuesday 20 Oct. Cardinal Wilfrid Napier of South Africa cautioned against using “politically correct language” at the daily press briefing for the Synod on the Family on Tuesday. Napier was a guest together with Cardinals Lluis Martinez Sistach of Spain and Alberto Suarez Inda of Mexico.

Fr. Federico Lombardi, SJ, explained that the interventions in the plenary sessions of all the Synod auditors were now available. Tomorrow the press will be briefed on the reports that come from the working groups - or "circoli minores" - of the Synod. The bishops will meet in plenary for the report back session on Tuesday evening.

Each of the three gave an introductory address before taking questions from the press.

Sistach said that he has experienced a real sense of synodality in the past two weeks. He said that his small group was very much focused on looking at marriage preparation. The bishops in his group also spent time examining the process of annulment in the light of the Motu Proprio, issued by Pope Francis earlier this year, so that they could make sure annulments are done expediently.

Inda said he believed that the Synod was important and would have an impact on the whole world. He said that the family was the “cell of life” in the Church. The Cardinal said that it was the role of bishops to be merciful judges in their dioceses. The bishops have to "listen like mothers" and practice discernment in specific situations. He also thanked the bishops of the United States of America for their welcome to South American migrants. Many migrants found hospitality in parishes in the USA. He said that the US bishops provide services to assist migrants.

Inda criticized American foreign policy which divided many families. He said that the bishops of Mexico and the USA need to work together to support marriages that have been divided because of migration. Many people migrate, not because they choose to, but because they have to, in order to survive. This leads to difficulties - like infidelity in marriage when the spouses do not see each other for extended periods.

Napier spoke specifically about what the African bishops thought. The African bishops have a great sense of optimism, first because it is God that is leading them and second because of the way that Pope Francis is leading the Church. He thanked lay people who were praying for the delegates of the Synod. Napier also affirmed people living in good marriages because “they help us to see where we need to go as a Synod.”

He said that the Synod was being guided by the title “The Mission and Vocation of the Family in the Church and in the World” and that he thought that some issues needed to be dealt with in another forum, especially issues related to discipline, that had been brought up in the Synod. Napier stressed that in Africa there was a different view of marriage.  “Marriage is not between two individuals but two families.” He went on to explain that, unlike the West, cohabitation is often part of the actual preparation process for marriage which is sanctioned by the families. He also spoke about how the Church must support child-headed households in Africa. A number of young girls are left with the responsibility of heading households because of the HIV pandemic.

Inda explained that drugs and guns were a huge problem and caused much harm to many families in Mexico. He said that for the bishops doctrine is of utmost importance, “but doctrine is not just theories, it must be rooted in reality.”

Sistach said that Christians get married in order to be joy-filled. He said that the work of the Synod is to aid people to be truly happy in their marriages.

Speaking on the process of the Synod Cardinal Napier said that the African bishops were happy. He said that there had been some problems - hence the private letter written to the Pope last week by some cardinals - but that these were resolved when the Holy Father “registered our concerns.”

When asked about the annulment process all three prelates said that the Motu Proprio gave them the tools they needed to assist people. The major difference was that they do not need to go to a second court of appeal which was often the cause of delays. They said, however, that the shortened process challenged bishops to ensure they had proper personnel in place and that the process was followed faithfully. If a case is complicated it must then go through the longer process so that the Church can ensure things are done correctly. Cardinal Sistach humorously said that a way of dealing with the Motu Proprio would be the creation of a new religious order!

At the end of the briefing Cardinal Napier was asked about the change or use of “new language” by the Church. This has been a consistent topic at the Synod – that the Church find new ways of talking that are more sensitive and inclusive. Napier said that it must be remembered that this was a pastoral synod, looking at how the Church can be servant and minister. He cautioned against the use of “politically correct” language and said that the Church has to be prophetic too.