Pope Francis: ‘Beware of those who limit the gratuity of salvation’ 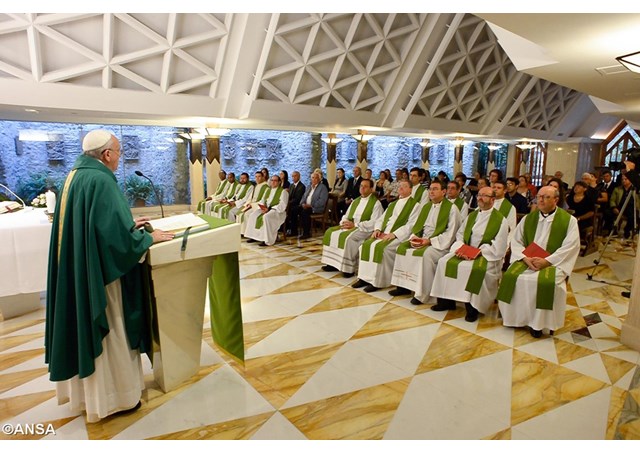 (Vatican Radio)  Beware of those who limit God’s horizons and reduce the love of God down to our size.  That was at the heart of Pope Francis’ homily at the Mass Thursday morning (Oct.15) at the Casa Santa Marta.

“Woe to you, scholars of the law! You have taken away the key of knowledge. You yourselves did not enter and you stopped those trying to enter.”  Those were Jesus’ words in the 11th chapter of the Gospel of Luke from which Pope Francis took his cue at Thursday’s Mass at the Casa Santa Marta.

“The key,” he continued, is “of the gratuity of salvation, of that knowledge”.  The scholars of the Law took away the key of God’s free gift of salvation, because, as the Holy Father said, “they thought that by respecting all the commandments one could be saved, and anyone who didn’t do just that was condemned”.  In this way, “they limited God’s horizons and made the love of God into something very, very small”, the Pope said.

Instead of a love based on retribution, Pope Francis said “If I say ‘I love you’, but I have a personal interest behind it, that is not love, that is self-interest.”

“Let us ask ourselves these questions,” the Pope said, “only in this way will we be faithful to this merciful love: the love of a father and a mother, because God also says He is like a mother with us; love, expanded horizons, without limits.  And let us not be fooled by scholars [of the Law] who limit this love.”